Apart from Bihar and Gujarat, the states of Himachal Pradesh, Uttar Pradesh, Jharkhand and Assam have approved the bill to implement the reservation. 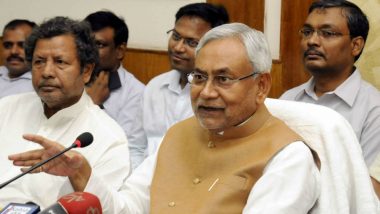 Patna, February 1: The Bihar cabinet on Friday passed the bill to implement the 10 percent reservation given by the Central government to the economically weaker section in the general category. With this move, Bihar becomes the sixth state to implement the Upper Caste Economically Weaker Section reservation. Gujarat was the first state to pass the bill for reservation to the economically weaker section of the Upper caste. Gujarat Becomes First State To Implement 10% Quota For Economically Weaker Sections in Upper Caste Communities.

Apart from Bihar and Gujarat, the states of Himachal Pradesh, Uttar Pradesh, Jharkhand and Assam have approved the bill to implement the reservation. Quota Bill Sanctioning 10% Reservation For Economically Weaker Sections Of Upper Castes Passed in Rajya Sabha.

The Constitution 124th (Amendment) Bill was passed in the Lok Sabha and the Rajya Sabha. The Bill provides 10 percent reservation in government jobs and educational institutions to the economically weaker sections. Lok Sabha Passes Bill to Grant 10% Reservation to Economically-weaker Sections of Upper Castes.

In Lok Sabha 323 MPs were in favour of the bill, whereas, only 3 voting against it. While in the Upper House, 165 lawmakers validated the Bill, and only 7 voted against it. The 124th Constitution Amendment Bill is reservation for EWS in general category who possess less than 5 acres of land and whose annual income is less than 8 lakhs.

(The above story first appeared on LatestLY on Feb 01, 2019 11:58 PM IST. For more news and updates on politics, world, sports, entertainment and lifestyle, log on to our website latestly.com).