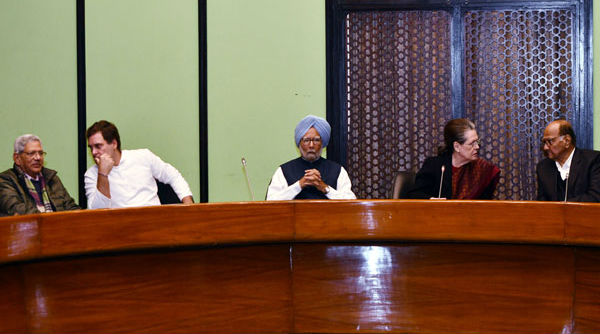 New Delhi, January 13: Seeking to corner the government over the Citizenship Amendment Act (CAA) and build momentum against NRC, leaders of Congress and 19 other opposition parties met here to deliberate their strategy even as Trinamool Congress, BSP, SP, and DMK were among the notable absentees.

The meeting, called by the Congress party, comes in the backdrop of protests against CAA in different parts of the country. Opposition parties have also expressed concern over the violence in JNU in which 30 students were injured and police action over anti-CAA protestors in different parts of the country. Maharashtra Not to Implement CAA, Suggests Shiv Sena's Sanjay Raut After Skipping Congress-Led Opposition Meet.

The meeting is being held two days after the meeting of Congress Working Committee (CWC) in which it strongly opposed CAA and NRC and termed the National Population Register (NPR) being carried out by the Central government as a "disguised NRC."

The meeting was attended by Jharkhand Chief Minister Hemant Soren and leaders from both the National Conference and the PDP but leaders from the Aam Aadmi Party and the Shiv Sena were not present.

Mamata Banerjee, whose party is opposed to CAA, had stated earlier that her party will not take part in the meeting over the "violence" by Congress and Left parties during a strike last week. BSP chief Mayawati cited "betrayal" by the Congress in Rajasthan as the reason for her party not attending the meeting. Mayawati conveyed her decision in tweets on Monday and said the participation of the party would have hurt its workers in Rajasthan.

"As is known, despite BSP supporting Congress government in Rajasthan from outside, they broke our MLAs for a second time and inducted them in their own party, which is a complete betrayal," she said.

"Under such circumstances, the BSP attending today's Opposition meeting called by Congress will be demoralising for the people of the party in Rajasthan. So the BSP will not take part in this meeting," she added.However, she stressed her party's opposition to the Citizenship Amendment Act (CAA). Shiv Sena, DMK Join Trinamool Congress and BSP in Skipping Sonia Gandhi-Convened Meeting Over CAA.

The meeting is being held days before the Budget Session, which is expected to begin in the last week of January.The government has said the CAA does not impact any Indian citizen and there is no link between the NPR and the NRC.