The satta bazaar is betting high on Aam Aadmi Party (AAP) leader Arvind Kejriwal returning to power in Delhi even as the Election Commission is yet to announce dates for assembly elections. 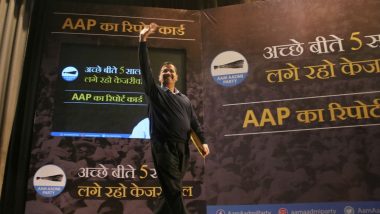 New Delhi, January 4: The satta bazaar is betting high on Aam Aadmi Party (AAP) leader Arvind Kejriwal returning to power in Delhi even as the Election Commission is yet to announce dates for assembly elections. While the campaigning for the Delhi assembly elections 2020 has not intensified, the AAP appears leading in the electoral race. The Bharatiya Janata Party (BJP) and the Congress have so far failed to woo Matka players. Delhi Assembly Elections 2020 Dates: Election Commission Plans to Announce Poll Schedule by January 10.

According to reports, the satta bazaar expects the AAP to win 54-56 seats in the 70-member House. The AAP registered a landslide victory in the 2015 Delhi assembly elections, winning 67 seats. The BJP is projected to bag 11-13 seats, up from 3 that the saffron party had won in the previous polls. The Congress, which drew a blank last time, could win 3-4 seats, according to Matka players. It shows the satta bazaar is banking high on Arvind Kejriwal.

A Tweet on Satta Bazaar Predictions For Delhi Assembly Elections 2020:

Last month, an internal survey of the BJP predicted a huge victory for the saffron party in the 2020 Delhi assembly elections. The survey, conducted by the Global Action Young Network for the BJP, said that the BJP will win 42 seats out of Delhi's 70 seats, while the ruling AAP was projected to bag 26 seats. The Congress may win just two seats, BJP's internal survey predicted.

According to the survey, the BJP is expected to improve its voting percentage from 2015 and may get around 46.6 percent of vote share, whereas the AAP may get around 31.8 percent. The Congress is likely to get 15.4 percent vote share. The survey further claimed that a majority of citizens in Delhi are "unsatisfied" with Arvind Kejriwal-led AAP government. The term of the current Assembly expires in February 2020.

(The above story first appeared on LatestLY on Jan 04, 2020 03:02 PM IST. For more news and updates on politics, world, sports, entertainment and lifestyle, log on to our website latestly.com).