Days after the death of DMK patriarch M Karunanidhi, the rift between his two sons is out in the open. 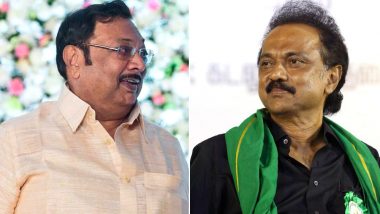 Chennai, August 13: Days after the death of DMK patriarch M Karunanidhi, the rift between his two sons is out in the open. A day ahead of the DMK meeting to decide on whether DMK Acting President MK Stalin be made Karunanidhi's successor, Alagiri has said that party cadre is with him. "All party supporters are with me," Alagiri said at the Karunanidhi memorial at Marina Beach on Monday morning.

While it was clear that Stalin would succeed Stalin as the DMK chief after Karunanidhi, Alagiri, who was expelled from the party four years ago, said, "I'm saddened by what's happening in the party."

The DMK will hold its executive meet on Tuesday in the run up to the 2019 Lok Sabha Elections. The meeting comes a week after former Tamil Nadu chief minister and party patriarch Karunanidhi died after prolonged illness.

(The above story first appeared on LatestLY on Aug 13, 2018 11:38 AM IST. For more news and updates on politics, world, sports, entertainment and lifestyle, log on to our website latestly.com).