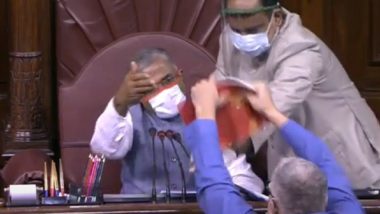 New Delhi, September 20: The Opposition parties in the Rajya Sabha submitted a no-confidence motion against Harivansh Singh, the Janata Dal (United) lawmaker, who was recently re-elected as the Deputy Chairman of the House. The unprecedented move was adopted by the anti-BJP bloc after the passage of the controversial farm bills in the Rajya Sabha. Agricultural Reform Bills: Rajya Sabha Passes 2 Farm Bills Amid Protests by Opposition Leaders And Farmers.

Two of the three controversial agrarian bills - Farmers’ Produce Trade and Commerce (Promotion and Facilitation) Bill, 2020, and Farmers (Empowerment and Protection) Agreement on Price Assurance and Farm Services Bill, 2020 - were passed by a voice vote today in the Upper House. Farm Bills: What Are The 3 Legislations Brought by Modi Government? Why Are Farmers Protesting? All You Need to Know.

When the Bill was first taken up for passage at around 1:20 pm, members from the Opposition benches rushed to the Well and snatched papers from the Speaker's desk. After a brief adjournment, the House resumed at 1:41 pm and immediately passed the two contentious legislations via a voice vote.

Trinamool Congress lawmaker Derek O'Brien, who snatched the Bill papers from Harivansh and tore it off during the first attempt to pass the legislations, called his conduct anti-democratic. The passage of the Bills without due consultation with all stakeholders will lead to a wave of protests across the nation, he said.

(The above story first appeared on LatestLY on Sep 20, 2020 04:16 PM IST. For more news and updates on politics, world, sports, entertainment and lifestyle, log on to our website latestly.com).