The 150-seat GHMC polls witnessed a high-voltage electioneering, with the Bharatiya Janata Party leading a heated campaign to unseat the Telangana Rashtra Samithi from power. Top BJP leaders including UP CM Yogi Adityanath and Home Minister Amit Shah had fired up the BJP's prospects, with the rhetoric involving Article 370, Jammu & Kashmir, Pakistan and Rohingya immigrants. 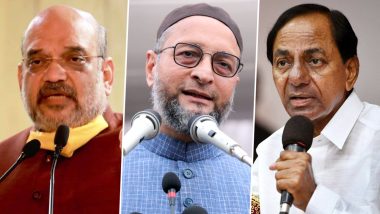 Hyderabad, December 4: Results of the high-stake elections for the Greater Hyderabad Municipal Corporation (GHMC) was declared late on Friday, nearly 13 hours after the counting began. As per the final stats, the Bharatiya Janata Party (BJP) ended up stunning the pollsters, with a victory in 48 seats. The party had only won 4 wards in the last civic polls in Hyderabad.

The Telangana Rashtra Samithi (TRS), despite emerging as the single largest party, saw its tally shrinking from 99 to 55 seats. The AIMIM succeeded in retaining its 44 wards, whereas, only two Congress candidates emerged victorious. N Uttam Kumar Reddy Resigns as Telangana Congress Chief After Party Gets Restricted to Only 2 Wards.

The counting of votes started from 8 am onwards. The polling body had set up 30 counting centres, and a total of 8,152 personnel would be engaged in counting activities.

The decisive trends emerged later in the day as ballot papers were used for the elections. Unlike the electronic voting machines (EVMs), the counting of votes through the ballot remains a more cumbersome exercise.

Top BJP leaders including UP Chief Minister Yogi Adityanath and Union Home Minister Amit Shah had fired up the BJP campaign, with the rhetoric involving Article 370, Jammu & Kashmir, Pakistan and Rohingya immigrants. On the last day of electioneering, Shah had promised to end the "Nizam culture" in Hyderabad if the BJP is elected to govern the GHMC.

In the 2015 elections, the TRS had succeeded in ending the tenure of Congress by winning 99 out of the 150 seats. The All India Majlis-e-Ittehadul Muslimeen (AIMIM) had wrested 44 seats, whereas, the BJP secured four and the Congress was restricted at two.

(The above story first appeared on LatestLY on Dec 04, 2020 01:42 PM IST. For more news and updates on politics, world, sports, entertainment and lifestyle, log on to our website latestly.com).