The Bharatiya Janata Party (BJP) is looking to cross an all-time record of 149 seats as it leads over 150 seats out of 182 seats, as per trends at 2 PM. 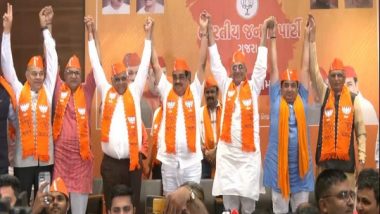 Ahmedabad, December 8: The Bharatiya Janata Party (BJP) is looking to cross an all-time record of 149 seats as it leads in over 150 seats out of 182 seats, as per trends at 2 PM. The BJP has been in power in Gujarat for 27 years but has never won an election with such a massive mandate.

The new Gujarat government will be sworn in on Monday. The Congress had in 1985 won 149 seats - which was the earlier record. The Congress and Aam Aadmi Party (AAP) are far behind. The AAP claims it has been recognised a national party after their performance in the Gujarat elections. Bhupendra Patel to Take Oath as Gujarat Chief Minister On December 12 After BJP Registers Historic Win in Vidhan Sabha Polls

Here Are Some of The Reasons Behind BJP Winning the Gujarat Elections 2022:

Gujarat has a close connection with Prime Minister Narendra Modi as he was the chief minister of the state for 12 years since 2002 The PM is the larger-than-life contestant in the Gujarat polls. The BJP’s poll lexicon is only ‘Modi sarkar’, not ‘BJP sarkar’. Gujarat Assembly Election Results 2022: Celebrations Begin as BJP Registers Historic Win

The crossing over of popular faces of the 2017 polls like Hardik Patel and Alpesh Thakor to the saffron party has made the 2022 contest more easy for BJP. There was a lot of infighting within the congress which made things lot easier for BJP.

Bhupendra Patel has an unblemished image, and most importantly comes from the electorally important Patidar community which accounts for 12-14 per cent of the electorate. The Patidars are extremely powerful, both financially and politically, and are spread throughout the state, with a concentration in north Gujarat and Saurashtra. Patel is known as a soft-spoken, mild-natured and down to earth person. There are no corruption charges against him.

The strong organisation, for which both Modi and Amit Shah are responsible, did the heavy lifting of transforming Modi’s popularity into votes for BJP. The saffron party tried every method possible to connect with the voters. The Congress, which has been out of power for more than two decades and which has lost a few of its leaders to BJP in the last one year, could not match the organisation skills of the BJP leadership.

Prime Minister Narendra Modi and the BJP leaders have made their best to invoke Gujarati asmita. During his speeches, Prime Minister Modi tried focusing on development, Gujarati asmita and the “son of soil” pitches. The narrative he wanted to build for the Gujarat election was not the present government’s performance but the gains and achievements of the past BJP governments. He had presented Congress president Rahul Gandhi as anti-Gujarati, creating doubts in the minds of voters.

The polls were held in two phases on December 1 and 5 across 33 districts of the state. The elections witnessed a turnout of 64.33 per cent, around 4 per cent less than the previous Assembly polls in 2017.

(The above story first appeared on LatestLY on Dec 08, 2022 02:51 PM IST. For more news and updates on politics, world, sports, entertainment and lifestyle, log on to our website latestly.com).