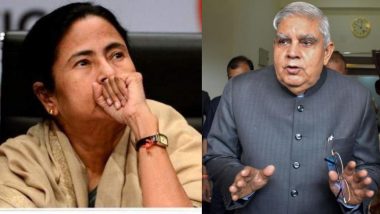 "Post-poll violence in Chief Minister Mamata Banerjee-led West Bengal continues in unabated fury that will put humanity to shame. State apparatus West Bengal Police just not moved at this plight emboldening those engaged in vandalism. All this to 'punish and discipline' opponents for 'daring' to vote in a democracy," tweeted the Governor.  ‘West Bengal Chief Secretary Alapan Bandyopadhyay Retired, To Act as Chief Advisor to CM’, Says Mamata Banerjee

He shared a video where houses were allegedly damaged after violence. He also shared the image of a police complaint made by a resident of the Canning area in the South 24 Parganas district.

"Shared details to DGP West Bengal Police. Done it on numerous occasions also to Chief Minister Mamata Banerjee. No response from any quarter. A day of reckoning for such heinous acts of omission is inevitable Hope good sense prevails and law and order is restored lest democracy be imperiled forever," said Dhankhar.

Violence has been reported in several parts of West Bengal after the results of the assembly elections were declared on May 2. Bharatiya Janata Party (BJP) alleged that nine of its party workers have been killed in the post-poll violence. However, the Trinamool Congress (TMC) is denying the allegations.

The West Bengal Government on May 25 informed the Supreme Court that three people have been arrested in connection with the alleged killing of two BJP workers in post-election violence on May 2 in the state.

On May 7, a four-member team deputed by the Ministry of Home Affairs had visited the Diamond Harbour area of West Bengal's South 24 Parganas district to assess the ground situation.

In May, a five-member Constitution Bench of the Calcutta High Court had also ordered West Bengal Home Secretary to file a report mentioning the places where the violence occurred and the steps taken.