The courageous instincts in Indira Gandhi were seen in her as early as she was a little girl. At the age of 5, when the country was observing the non-cooperation movement called by Mahatma Gandhi, Indira had ended up burning her doll which was "Made in England". 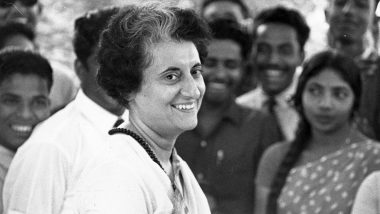 New Delhi, October 30: Indira Gandhi, one of the tallest post-independence leaders of India, was assassinated on October 31, 1984. On her 36th death anniversary, followers of the late former Prime Minister would recall her contributions towards the nation. Hailed as the "Iron Lady" of India, Indira led the nation as the PM for three terms - 1966-1971, 1971-77 and 1980-84. Congress to Observe Kisan Adhikar Diwas on October 31.

Indira earned the reputation of a decisive leader after she led the nation through the 1971 war with Pakistan, that led to the creation of Bangladesh. The Pokhran I test carried out in 1974, also under her prime ministership, had sent out a clear message to the world that sovereign India will act independently on issues of national interest and territorial security.

The imposition of emergency was an infamous chapter in the political career of Indira, as her popularity was hurt and the Congress suffered a brutal defeat in the parliamentary elections that was held in 1977. Defying the odds, however, Indira succeeded in reclaiming power in the polls that were held in less than 3 years. On her death anniversary, here are five lesser facts about India's third Prime Minister.

Indira Burnt Her 'Made in England' Doll at Age of 5

The courageous instincts in Indira Gandhi were seen in her as early as she was a little girl. At the age of 5, when the country was observing the non-cooperation movement called by Mahatma Gandhi, Indira had ended up burning her doll which was "Made in England".

At the age of 25, Indira tied the knot with a Parsi man, Feroze Ghandy (name later changed to Feroz Gandhi). According to historians, the marriage was an act of courage and defiance in a society that was still rooted in conservatism and interfaith marriages were rare instances.

A socialist Indira had drawn India closer towards Russia, at a time when the Cold War was underway. Her refusal to back down from the 1971 war despite pressure from the United States had irked the then US President Richard Nixon. Ahead of the war with Pakistan, Indira made a bilateral visit to the United States.  As per the Oval Office recordings later obtained, President Richard Nixon had told US Secretary Henry Kissinger that the Indian PM was an "old witch".

'Only Man in Her Cabinet'

Indira, during her stint as the Prime Minister, earned the reputation of being a taskmaster, firm decision maker and no-nonsense administrator. While several contemporary writers and politicians validated the claim that she evoked utmost respect and authority in the government, one of the most famous references about her is that she was the "only man in her cabinet". The phrase is believed to be first used by Piloo Mody, the founder of rival Swatantra Party.

Another rare-known fact about Indira Gandhi is her bond with UK PM Margaret Thatcher. Political contemporaries, both ended up becoming the first woman prime minister of their respective nations. After the assassination of Indira, Thatcher flew to India to pay her last respects.

"I cannot describe to you my feelings at the news of the loss of your mother, except to say that it was like losing a member of my own family. Our many talks together had a closeness and mutual understanding which will always remain with me. She was not just a great statesman but a warm and caring person," Thatcher said in the note she handed over to Rajiv Gandhi.

(The above story first appeared on LatestLY on Oct 30, 2020 08:16 PM IST. For more news and updates on politics, world, sports, entertainment and lifestyle, log on to our website latestly.com).