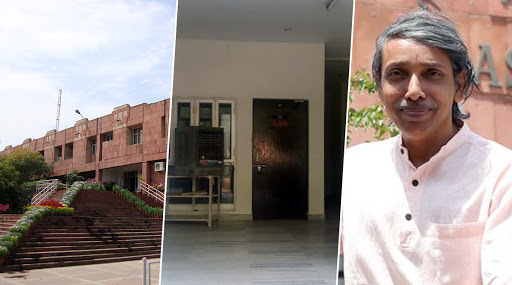 New Delhi, December 14: Hours after the meetings with students and teachers of Jawaharlal Nehru University to discuss the hostel fee hike, varsity Vice-Chancellor M Jagadesh Kumar alleged that he was attacked and heckled by students. While the students claim that Kumar is a habitual liar and ran away from the meeting when a student asked him a question. The students also claimed that the Vice Chancellor had been missing from the university for the last 50 days.

Staking a claim of being attacked by the students when he visited the University's School of Arts & Aesthetics, Kumar said, "I was attacked today. I had gone to visit School of Arts & Aesthetics, JNU where around 10-15 students surrounded me. They were trying to pull me down & in a mood to attack me. Fortunately, I was rescued by security & managed to escape." JNU Explains Rationale Behind Fee Hike, Says University Has a Deficit of Rs 45 Crores, So 'Levying Service Charge is Necessary'.

JNU vice-chancellor M. Jagadesh Kumar: I was attacked today. I had gone to visit School of Arts & Aesthetics, JNU where around 10-15 students surrounded me. They were trying to pull me down & in a mood to attack me. Fortunately, I was rescued by security & managed to escape. pic.twitter.com/QPd5b4rQTg

On the other side, former JNU Students' Union president N Sai Balaji said that VC Kumar is a habitual liar. Balaji said, "VC Kumar is a habitual liar. He is missing in the University and avoids to meet the students. He doesn't even care about the issues of students. Today in the meeting, when a student asked him a question, he ran away from there and now he alleges that he was being attacked. Its unbelievable."

Adding more, Balaji pointed out that the JNU administration has been trying to instigate students for violence so that they police and CRPF can be deployed inside the campus. Since the students have maintained that they beleive in dialogue process, the administration is removing the entry doors of schools so that students may get divided in their protests agaisnt recent fee hikes, Balaji said.

It is to be known that Union HRD Ministry had asked the high-powered committee to compare the hostel fee structure of JNU, after the second rollback, with other central universities. Last month, a three-member committee to recommend ways to restore normalcy in JNU was set up by MHRD. It was aimed to mediate between students and university administration, and submitted its report but the ministry is yet to take a call on it.

On Monday, while replying on the current situation of JNU, HRD Minister Ramesh Pokhriyal ‘Nishank’ had informed the Lok Sabha that the government has not directed any central university to increase fees. The questions were raised after horrific images of protesting JNU students -- beaten by Delhi Police -- made the headlines. All the students were allegedly beaten while they were tried to march to the Rashtrapati Bhavan to meet the president and urge him to ensure the hike in hostel fee is completely rolled back.