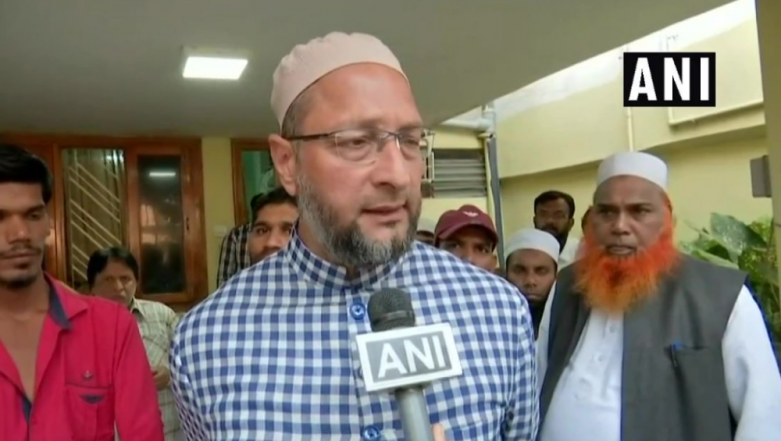 Owaisi, who is seeking re-election for a fourth consecutive term, also declared that his liabilities stand at Rs 9.30 crore including Rs 5 crore loan taken from younger brother Akbaruddin Owaisi. The liabilities of his wife are at the tune of Rs 2.75 crore including Rs 1.20 crore payable to him towards her share in cost of construction of their house. Lok Sabha Elections 2019: Asaduddin Owaisi Files Nomination Papers in Hyderabad, Seeks 4th Term as MP.

The 49-year-old leader owns no agricultural or non-agricultural land or commercial building. His residential buildings includes a house at Shastripuram where he currently resides. In this property with a built-up area of 36,250 square feet, Owaisi has three-fourth share and his wife has one-fourth share. They purchased the land for Rs 2 crore and invested Rs 11 crore for construction, the declaration shows. The approximate current market value of the house is Rs 15 crore.

He owns another house at Misri Gunj worth Rs 60 lakh. He has 2/8th share (Rs 37.50 lakh) in a flat in Nav Sansad Vihar, Dwarka, New Delhi. The declaration also mentions that there are five criminal cases pending against him with charges framed in respect to one case. He declared that he was not convicted for any criminal offence.

In 2014 elections, Owaisi had declared movable assets of Rs 27.84 lakh and immovable assets to the tune of over Rs 3.10 crore with total liabilities standing at Rs 1.40 crore.