She will be trying her luck for the first time in the Lok Sabha polls after Stalin announced her candidature from Tuticorin constituency in southern Tamil Nadu. 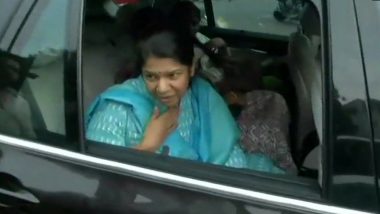 Chennai, March 18: The DMK Monday denied dynasty politics in naming its candidates for the April 18 Lok Sabha elections in Tamil Nadu and asserted that only loyal party workers have been rewarded with a ticket. Senior party leader and Rajya Sabha MP Kanimozhi said only those who have been serving the party for long have been given a ticket to fight the elections.

Kanimozhi herself is the daughter of late party chief M Karunanidhi and the DMK is now headed by her brother M K Stalin. She will be trying her luck for the first time in the Lok Sabha polls after Stalin announced her candidature from Tuticorin constituency in southern Tamil Nadu. "Those who have been working for the party for long only have been given a seat, not that someone has been brought from outside," Kanimozhi told reporters when asked about dynasty politics dominating the list of DMK candidates. MK Stalin Snubs PM Narendra Modi, Says 'DMK Will Never Align With BJP'.

She said that there was no need to deny ticket to somebody just because the person happened to be a political heir. She was speaking to reporters after calling on DMK ally, MDMK founder Vaiko at his residence here. Besides Kanimozhi from the DMK's first family, the party has fielded Karunanidhi's grandnephew and former Union Minister Dayanidhi Maran and senior party leader Durai Murugan's son DM Kathir Anand.

Dr Kalanidhi Veerasamy, son of another senior leader Arcot N Veerasamy, has also been nominated by the DMK, from the Chennai North segment.

Similarly, Gowtham Sigamani, son of sitting DMK MLA and former Minister K Ponmudy, has also been given a party ticket for the April 18 parliamentary elections. Kanimozhi said the police firing on anti-Sterlite protesters on May 21 last year, GST and demonetisation will figure as key issues in her campaign in the southern constituency.

Meanwhile, Vaiko exuded confidence that Kanimozhi will secure a grand victory by ensuring a victory margin of about one lakh votes. He said that he would launch his election campaign from Tuticorin on March 22 and DMK chief Stalin will do it from Tiruvarur, the native constituency of late Karunanidhi. Tiruvarur is one of the 18 assembly seats where by-polls are scheduled along with the Lok Sabha polls.