While the SP and BSP would contest 37 seats each out of 80 Lok Sabha seats in the state, six seats will go to allies, including two for the Congress. 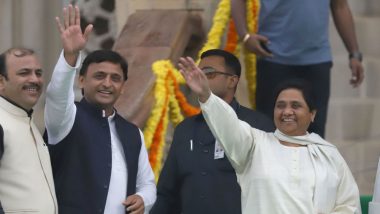 Lucknow, January 6: The Samajwadi Party (SP) and Bahujan Samaj Party (BSP) have decided to contest the Lok Sabha elections 2019 in Uttar Pradesh in an alliance that will have very little space for the Congress. While the SP and BSP would contest 37 seats each out of 80 Lok Sabha seats in the state, six seats will go to allies, including two each for the Rashtriya Lok Dal (RLD) and the Congress.

SP chief Akhilesh Yadav met BSP supremo Mayawati on Friday evening in the national capital to seal the seat-sharing arrangement. The formal announcement on the alliance between the SP and BSP is likely to be made on January 15, 2019, when BSP supremo Mayawati celebrates her birthday. That also happens to be the birthday of Dimple Yadav, wife of Akhilesh. The two parties may organise a joint celebration before announcing a tie-up. Ram Madhav Derides MK Stalin For Proposing Rahul Gandhi as PM Candidate: 'No Vacancy For Prime Minister's Post Next Year'.

Of the remaining six seats, two (Rahul Gandhi's Amethi and Sonia Gandhi's Rae Bareli) would be left for the Congress. Jat leader Ajit Singh’s RLD would get Baghpat and Mathura seat. The NDA’s ally in UP, Suheldeo Bharatiya Samaj Party (SBSP), could get one seat, while the other seat could be given to one more smaller party. In the 2014 Lok Sabah elections, the BJP and its allies won 73 seats. The SP won five, and the Congress two.

Efforts are also on to bring OBC outfits like Nishad Party and Krishna Patel faction of Apna Dal into the alliance in a bid to forge a larger social and political alliance against the BJP. While powerful sections in both SP and BSP are keen to bring the Congress into the alliance, obviously to safeguard their Muslim vote bank in UP, political observers feel the SP chief is slowly distancing himself from the Congress.

The SP and Congress joined hands for the 2017 state assembly elections in Uttar Pradesh but they were routed by the BJP.

(The above story first appeared on LatestLY on Jan 06, 2019 09:53 AM IST. For more news and updates on politics, world, sports, entertainment and lifestyle, log on to our website latestly.com).