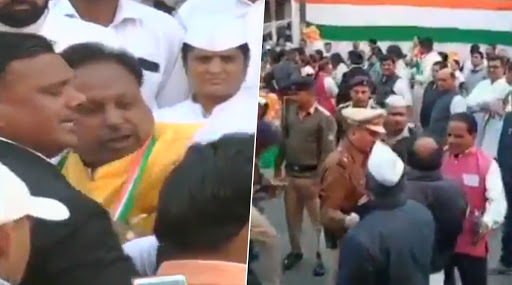 Indore, January 26: India is celebrating 71th Republic Day on Sunday and two Congress leaders engaged a brawl in Indore ahead of the flag hoisting ceremony by Chief Minister Kamal Nath. The brawl was recorded on camera in which the two leaders could be seen slapping each other outside the Gandhi Bhawan – the Congress party office - in Indore.

According to the reports, the leaders have been identified as Devendra Singh Yadav and Chandu Kunjir. Both on them engaged in a brawl ahead of the Republic Day flag hoisting ceremony by CM Kamal Nath. Following the brawl, both these leaders were separated by the police and other Congress workers. Though the reason for the brawl is still unclear, they were arguing before they started hitting each other. Later, CM Nath reached the site and unfurled the tricolour. Republic Day 2020: P Chidambaram Warns Against Rising Authoritarianism, Says 'Let Us Raise Level of Protest'.

#WATCH Madhya Pradesh: Two Congress leaders, Devendra Singh Yadav and Chandu Kunjir, entered into a brawl during the flag hoisting ceremony during #RepublicDay celebrations at the party office in Indore. They were later calmed down with the help of police intervention. pic.twitter.com/Q9NcEJ3Sw5

It is to be known that both Yadav and Kunjir are considered as relative lightweights in the Congress. Citing more tensions, police later escorted out Kunjir and his supporters from the premises.