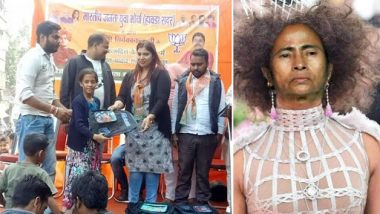 Kolkata, May 12: The Chief Judicial Magistrate’s court in Howrah on Saturday sent a BJP Yuva Morcha leader sent to judicial custody for two weeks and slapped her with non-bailable charges. The A 25-year-old woman in West Bengal was found guilty by the court in connection with an offensive social media post regarding Trinamool Congress supremo and Chief Minister Mamata Banerjee.

Earlier, Priyanka Sharma was arrested by the West Bengal police on Friday for allegedly sharing a picture of Bollywood actor Priyanka Chopra at the red carpet of the recent Met Gala in New York and had superimposed Mamata Banerjee’s face on that of the actor’s. Sharma - as her Facebook profile says - is the Howrah district club cell convener for the Bharatiya Janata Yuva Morcha (BJYM).  BJP Youth Leader Posts Priyanka Chopra’s Met Gala 2019-Themed Meme on Mamata Banerjee, Arrested.

Acting on the complaint of Trinamool Congress leader Vibhas Hazra's complaint, the police had arrested Sharma. She was booked under Section 500 of the IPC (defamation), and Sections 66A (offensive messages) along with the non-bailable 67A (punishment for publishing or transmitting of material containing sexually explicit act, etc., in electronic form) of the Information Technology Act. The Facebook post of Sharma has been removed from the timeline.

Informing more about the 14-day police custody, a senior police officer said, as reported by Indian Express, "She was produced at a court in Howrah which has remanded her in police custody for 14 days. That is all I can say." Though, Sharma had applied for bail, but it seems unlikely that she would be released before may 14 as courts in Howrah will remain on strike till May 14.

(The above story first appeared on LatestLY on May 12, 2019 03:01 PM IST. For more news and updates on politics, world, sports, entertainment and lifestyle, log on to our website latestly.com).