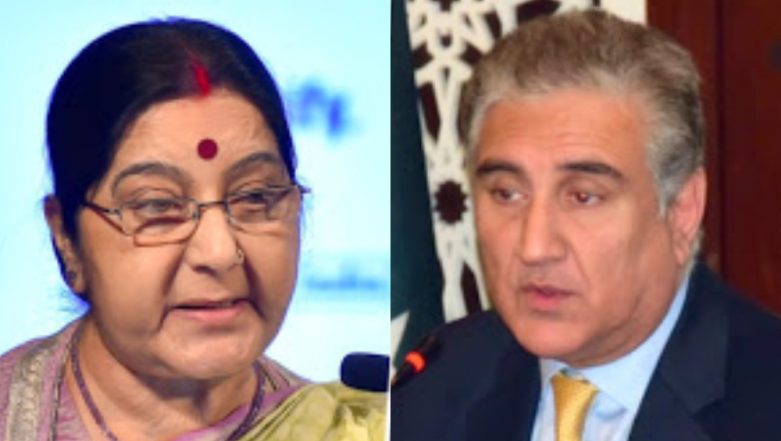 Bishkek, May 23: External Affairs Minister Sushma Swaraj and her Pakistani counterpart Shah Mehmood Qureshi exchanged pleasantries on the sidelines of SCO meeting here on Wednesday and were seated next to each other during an interaction with Kyrgyz President amid strain in ties between the two countries following the Pulwama terror attack. MEA sources said that there was no meeting and only exchange of pleasantries between the two leaders.

Both the leaders attended the meeting of the Shanghai Cooperation Organisation's (SCO) Council of Foreign Ministers (CFM). Pakistan media outlet the Dawn, however, said that Qureshi and Swaraj held "an informal dialogue" on the sidelines of ASCO meeting. "Today [I] met Sushma Ji. She had a complaint that we sometimes talk in a bitter manner. She brought sweets today so we could also speak sweetly," Qureshi was quoted as saying by the Foreign Office, according to the Dawn. Pakistan Foreign Minister Shah Mehmood Qureshi to Skip OIC Meet Due to Sushma Swaraj's Presence as 'Guest of Honour'.

"We made it clear to her that we want all the matters resolved through dialogue, and that Prime Minister Imran Khan had said in his very first speech that if India takes one step forward, we would take two steps forward. Even today we are ready for a dialogue," he was quoted as saying.

Tensions between India and Pakistan increased after the Pulwama terror attack in February in which 40 Central Reserve Police Force personnel were killed. Pakistan-based Jaish-e-Mohammed (JeM) had taken responsibility for the attack. India had later carried out air strikes at a terror camp in Balakot in Pakistan.

The exchange of pleasantries between the two leaders took place at a time when India is awaiting results of its general elections. Both countries are expected to look for a thaw in bilateral relationship after a new government assumes office in Delhi.