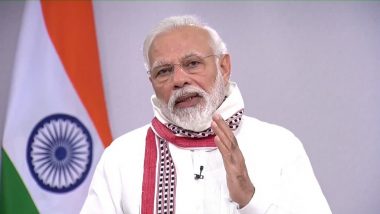 "Workers of Bihar BJP and the people deserve congratulations. Many people were saying that COVID-19 will spread faster in eastern parts of the country due to high temperatures. But you all have proved it wrong," said PM Modi, after the state unit of party listed the work undertaken by them following the announcement of lockdown in mid-March.

According to the Bihar unit of BJP, they provided commutation facilities to over 1.7 lakh workers during the lockdown period. Over 62,000 state party workers were actively involved in providing relief material to those in need, they claimed.

#WATCH "Many people were saying that COVID-19 will spread faster in eastern parts of the country due to high temperatures. But you all have proved it wrong," says PM Modi in Bhojpuri after reviewing relief works by Bihar BJP during lockdown pic.twitter.com/OaNrtQNRmx

BJP is one of the key stakeholders of Bihar politics, and had emerged as the third largest electoral group in the 2015 assembly elections. The party, in the upcoming polls which are likely to be held in November, is contesting in an alliance with its ruling coalition partner in the state - Nitish Kumar's JD(U).

Apart from the Bihar BJP, Modi also praised the party workers in Rajasthan - where they are in the Opposition. "Rajasthan BJP has shown how to stand shoulder to shoulder with people, no matter if we are in the power or out of the power. Very inspiring," he said.

"Several of our workers despite knowing the danger, kept working in the service of people and lost their lives. I pay my tributes to all of them & express condolences to their families," he said,

"This is the biggest 'sewa yajna' in human history. I urge you to prepare Digital booklets documenting the relief works, at mandal, district, state and country levels. The booklets should be in at least 3 languages," Modi added.

(The above story first appeared on LatestLY on Jul 04, 2020 06:10 PM IST. For more news and updates on politics, world, sports, entertainment and lifestyle, log on to our website latestly.com).