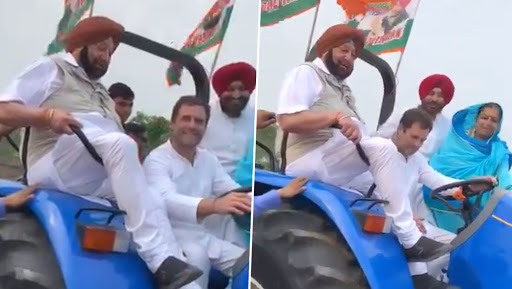 Ludhiana, May 15: Congress President Rahul Gandhi on Wednesday while campaigning for the seventh phase of Lok Sabha elections 2019 in Ludhiana drove a tractor on the fields. After the Congress president shared his video on his official Facebook page, the party also tweeted the same. Ludhiana Lok Sabha Constituency in Punjab: Candidates, Current MP, Polling Date And Election Results 2019.

Earlier in the day, during an election rally in Ludhiana, Gandhi took a dig on the SAD-BJP alliance over the sacrilege issue. He warned of strong action against the culprits behind the Bargari and other cases of desecration of the holy scriptures. The Congress President also alleged that Prime Minister Narendra Modi destroyed the Indian economy.

Ludhiana is going for polls in the seventh phase of the general elections on May 19. The constituency will witness a contest between Congress and Shiromani Akali Dal (SAD). The SAD has fielded Maheshinder Singh Grewal. Meanwhile, the Aam Aadmi Party (AAP) has also fielded Tej Pal Singh Gill from here. The counting of votes will take place on May 23. Lok Sabha Elections 2019 Schedule: Voting In 7 Phases From April 11 to May 19, Counting And Results On May 23.

From the last two times, Congress managed to win the seat. In 2014, elections, Bittu had won this seat. However, Phoolka gave him a tough fight. While, in 2009 elections, Congress candidate Manish Tewari remained victorious.