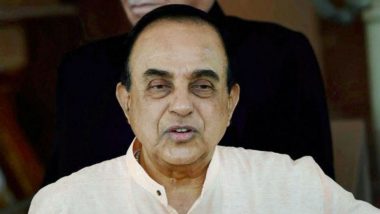 Swamy levelled the "Shree 420" charge on Kejriwal, as he accused the Aam Aadmi Party (AAP) supremo of only usurping the limelight by appearing daily on the television. In terms of states, he said, Delhi accounts for 9 percent of the nationwide tally, whereas, Gujarat accounts for 1.6 percent. Delhi: Patients Complain of Overcharging by Some Private Hospitals for COVID-19 Treatment.

"I am impressed that Gujarat accounts for only 1.6 percent of the coronavirus cases in India while Delhi accounts for 9 percent. Shree 420 only appears on TV daily but does nothing for Delhi," the BJP Rajya Sabha MP said.

I am impressed that Gujarat accounts for only 1.6% of the Coronavirus cases in India while Delhi accounts for 9%. Shree 420 only appears on TV daily but does nothing for Delhi.

Delhi, though with a higher caseload, is appeared to have hit the peak as the number of new infections per day have "flattened". The infection rate has fallen to 0.96 percent, and the doubling period has increased to over 70 days. The total count of cases stood at 1,29,531, including 1.13 lakh recoveries and 3,806 deaths.

Gujarat, on the other hand, has recorded 54,712 cases of COVID-19 so far. The Opposition, however, has accused the Vijay Rupani government of conducting insufficient number of tests to conceal the figures. A total of 39,612 patients have recovered in the state so far, whereas, 2,305 have succumbed to death.

(The above story first appeared on LatestLY on Jul 26, 2020 04:32 PM IST. For more news and updates on politics, world, sports, entertainment and lifestyle, log on to our website latestly.com).