The Uniform Civil Code (UCC) - which would scrap the separate civil laws applicable for minorities in religious and cultural affairs - could be implemented by rushing a legislation in both Houses of the Parliament, the Twitterati pointed out. The basis of their claim was a viral image which showed that a legislation on UCC is listed for introduction in the Upper House. 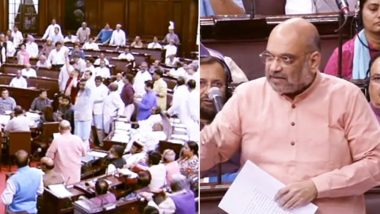 New Delhi, February 10: With the Bharatiya Janata Party (BJP) issuing a whip to its lawmakers in Lok Sabha and Rajya Sabha for Tuesday, speculations turned rife on social media over what is next on the Narendra Modi government's agenda. Drawing parallels with the shock repeal of Article 370 on August 5 last year, the netizens wondered whether the BJP-led NDA government is planning to address another controversial issue.

The Uniform Civil Code (UCC) - which would scrap the separate civil laws applicable for minorities in religious and cultural affairs - could be implemented by rushing a legislation in both Houses of the Parliament, the Twitterati pointed out. The basis of their claim was a viral image which showed that a legislation on UCC is listed for introduction in the Upper House.

The Uniform Civil Code of India Bill, 2020, was scheduled to be introduced in the Rajya Sabha on Friday by BJP MP from Rajasthan, Narayan Lal Panchariya. However, when his name was called, Panchariya was not present. After he returned in the next few minutes, the Speaker allowed him to speak. The BJP lawmaker did not introduce the Bill on civil code, leading to speculations that the party has asked him to drop the proposed legislation.

'UCC to be Tabled Tomorrow'

The uniform civil code bill will be tabled tomorrow. This will ensure civil rights for every Indian equally without any discrimination.#UCC #india #equality

Even as a section of the Twitter users predicted a Bill on UCC to be tabled tomorrow, netizens also claimed that the centre could be tabling a Bill to overturn the Supreme Court's verdict on reservation in government jobs and promotion. A two-judge bench on Monday ruled that the government is not bound to implement quota for the marginalised and backward communities in appointments.

The verdict had drawn flak towards the Centre from the Opposition, which demanded the government to take immediate measures to save the rights of the Scheduled Caste, Scheduled Tribes and Other Backward Classes (OBC) communities. BJP allies LJP and JD(U) also called upon the Modi government to address the issue on urgent basis.

The whip issues to the Lok Sabha and Rajya Sabha MP, by the BJP, could be aimed at introducing a law which overturns the apex court order and safeguards the provisions ensuring quota in government jobs and promotions.

I think this Whip is for Damage Control Over a supreme Court Verdict on reservation in Jobs case filed by Congress led Uttarakhand Govt in 5-9- 2012 to Overturn before outrage . https://t.co/i4kywkNxrA

The third option being discussed by a significant section of the netizens was a Bill to curb population expansion in India. Echoed for years within the circles of the BJP and its ideological parent - the Rashtriya Swayamsevak Sangh (RSS) - a legislation on population control could end putting a cap on the number of children which each family can give birth to. The law, according to BJP MP Subramanian Swamy, is necessitated as the "minority population" is growing faster as compared to their majoritarian counterparts. Statisticians have, however, questioned the claim.

Even as the internet kept buzzing after reports of the BJP whip emerged, certain voices on the social media said an "unnecessary hype" is being created. According to journalist Narendra Nath Mishra, the whip is only aimed at passage of the Budget Bill.

The whip issued by the BJP, indicative of a major legislative move, comes amid nationwide protest against the Citizenship Amendment Act (CAA) which was passed by the Parliament in December last year. Combined with the National Population Register (NPR) updation exercise and the proposed nationwide National Register of Citizens (NRC), the law is being viewed by critics as a ploy to rid a section of vulnerable Indian Muslims of their citizenship.

(The above story first appeared on LatestLY on Feb 10, 2020 11:13 PM IST. For more news and updates on politics, world, sports, entertainment and lifestyle, log on to our website latestly.com).