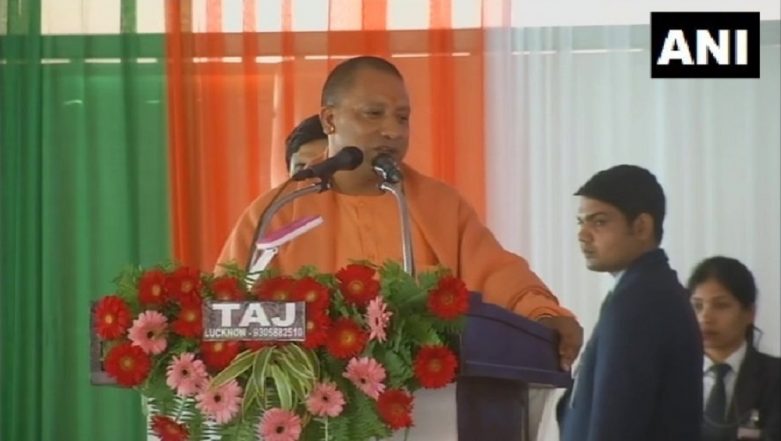 Lucknow, February 3: The tussle between the TMC and the BJP got uglier Sunday, with the West Bengal government denying permission to Uttar Pradesh Chief Minister Yogi Adityanath's chopper to land in the state to let him address two scheduled rallies. Adityanath addressed the rallies there telephonically and lashed out at the "anti-people" Trinamool Congress (TMC) government in the state, saying the days of Chief Minister Mamata Banerjee's rule are "numbered".

The UP chief minister and state BJP president Dilip Ghosh were scheduled to address "Ganatantra Bacaho Rallies" at Balurghat in South Dinajpur district and Raiganj in North Dinajpur district. Though the BJP had been allowed to organise the rallies, the district administration denied permission for Adityanath's chopper to land at both the places, party leaders said. West Bengal BJP President Dilip Ghosh Tells Police They 'Aren't Worth Wearing Uniform', Calls People From Jharkhand 'Bomb-Makers'.

Following denial of permission to land his chopper, Adityanath decided not to attend either of the rallies and instead addressed them telephonically. "This is nothing new. Whenever we try to organise any rally, they create hurdles. This is shameful. But the TMC is mistaken if it thinks it can stop us by not giving us permission for holding rallies or landing chopper," Ghosh told PTI.

"The TMC government is afraid of the BJP as it very well knows its days in the state are numbered," he said. Alleging that the Banerjee government had tried to stop Durga Puja in West Bengal to pursue its appeasement policy, Adityanath urged BJP workers to fight vigorously and ensure that the party forms the next government in the state.

"Mamata Banerjee should remember that she cannot misuse the government and its agencies in the state. It is shameful that the government officials are acting as TMC cadres in the state," he said. Referring to various central schemes which have been stopped from being implemented in the state, Adityanath said the TMC has no right to deprive the people from benefits offered by the central government.

Adityanath rued that "Bengal which had been the torch bearer of democracy in the country is forced to face the dictatorship of the TMC." "We have to shatter this undemocratic model," he said. The Uttar Pradesh chief minister also referred to former President Pranab Mukherjee, whom, he said, "the Government of India honoured with the Bharat Ratna."

Referring to the BJP linkages with West Bengal, Adityanath said, "Jan Sangh founder Syama Prasad Mookerjee was from Bengal." "West Bengal has been the cradle of the country's intellectual property, whether it be the tradition of Ram Krishna Mission or Swami Vivekanand," he added. Adityanth ended his telephonic speech with Vande Mataram and Jai Shri Ram.