Who Will Be The Next Gujarat Chief Minister? Here Is List of Probables Who May Succeed Vijay Rupani

Gujarat Chief Minister Vijay Rupani resigned from his post on Saturday. The development came almost a year ahead of the Gujarat Assembly Elections 2022. Rupani submitted his resignation to governor Acharya Devvrat. 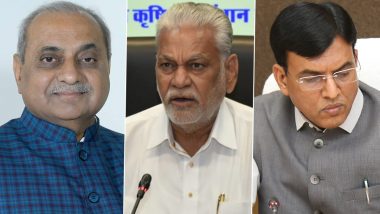 Gandhinagar, September 11: In an unexpected move, Gujarat Chief Minister Vijay Rupani resigned from his post on Saturday. The development came almost a year ahead of the Gujarat Assembly Elections 2022. Rupani submitted his resignation to governor Acharya Devvrat. He also thanked the Bharatiya Janata Party (BJP) for giving an opportunity to serve the state. Vijay Rupani Resigns as Gujarat Chief Minister Months Before Assembly Elections 2022.

Rupani told reporters, "I am resigning from the post of the Chief Minister. I thank PM Modi and the party for giving me an opportunity to work for five years," Vijay Rupani told the reporters at Raj Bhavan." Rupani became CM of the state on August 7, 2016, and is representing Rajkot West in the Gujarat Legislative Assembly. Rupani's cabinet has also resigned after the CM's resignation. Gujarat CM Vijay Rupani Says ‘Dealing Strictly With Cow Slaughter and Those Trapping Hindu Girls’.

Here Are Probable Candidates Who Can Replace Vijay Rupani:

Nitin Patel: Deputy Chief Minister Nitin Patel is the front runner for the Gujarat CM post. He assumed the charge of the Deputy CM on August 5, 2016. He was elected to the Gujarat Legislative Assembly from Mehsana in 2012 and 2017.

Parshottam Rupala: He is a renowned leader of the Patidar community and belongs to the Kadva Patidar community. Rupala is currently a Rajya Sabha MP. His term is ending in four months. He was a former member of the Gujarat Legislative Assembly from Amreli and formerly served as a minister in the Government of Gujarat.

Bhupendrasinh Chudasama: He is the Gujarat education minister. Chudasama was elected as Member of Gujarat Legislative Assembly from Dholka constituency five times in 990, 1995, 2002, 2007 and 2012. Notably, on May 12, 2020, the Gujarat High Court declared that the 2017 election of Chudasama was invalid. However, the proceedings were stayed by the Supreme Court a few days later.

CR Patil: Chandrakant Raghunath Patil is a member of the 17th Lok Sabha. He was elected from the Navsari constituency of Gujarat. In 20214, he won the Lok Sabha constituency with over five lakh votes.

According to some reports, Union Health Minister Mansukh Mandaviya  can also be chosen as the Gujarat CM. Mandaviya is also a Rajya Sabha member of the state. Notably, the BJP will reportedly announce Rupani's replacement by Sunday. Till now, it is still not clear as to why Rupani resigned from the post. The other states rules by the BJP, where the change of leadership took place recently are – Karnataka and Uttarakhand.

(The above story first appeared on LatestLY on Sep 11, 2021 04:57 PM IST. For more news and updates on politics, world, sports, entertainment and lifestyle, log on to our website latestly.com).