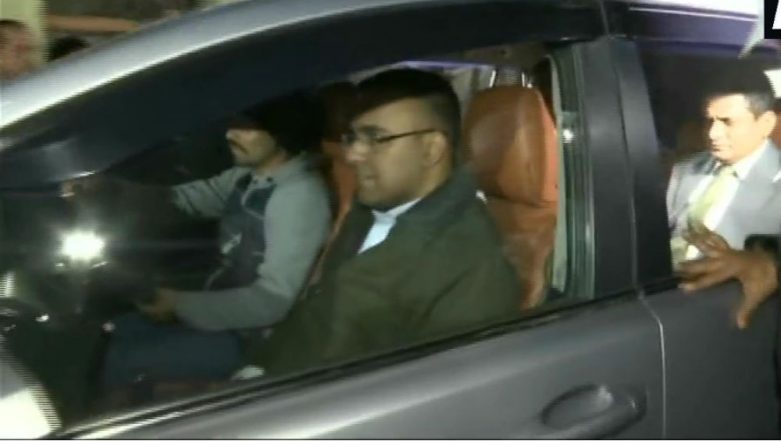 Kolkata police commissioner Rajeev Kumar (seated at the back in SUV) appeared for questioning before the CBI in Shillong in relation to Saradha chit fund scam | (Photo Credits: ANI)

Kolkata, Jun 7: Former commissioner of Kolkata Police Rajeev Kumar Friday appeared before the CBI in connection with the multi-crore Saradha scam, that left thousands of small investors in the lurch. Kumar, who is presently the additional director general of police in the CID, reached the CBI office in the morning to face questioning by the agency officials for the second time, sources in the agency said. Saradha chit fund scam: Supreme Court Asks Ex-Kolkata Police Chief Rajeev Kumar to Respond to CBI's Plea for His Arrest.

In February, Kumar had been interrogated by CBI officials in Shillong under directions of the Supreme Court which had asked him to cooperate with the probing agency. The senior police officer was heading the Special Investigation Team (SIT) of West Bengal Police before the Central Bureau of Investigation took over the case.

The premier investigative agency had last month issued a lookout notice against Kumar and directed all airports and immigration authorities to alert it if they spot him leaving the country. Kumar, who recently moved the Calcutta High Court seeking quashing of the CBI notice against him, was granted protection from coercive action till July 10 but was asked to cooperate with the agency in investigation into the case. Kolkata Police Commissioner Rajiv Kumar, Who Came Under CBI Scanner in Chit Fund Case, Removed.

In April, the CBI had told the Supreme Court that Kumar's custodial interrogation was necessary as he was not cooperating in the probe and was "evasive" and "arrogant" in answering the queries put to him during questioning.