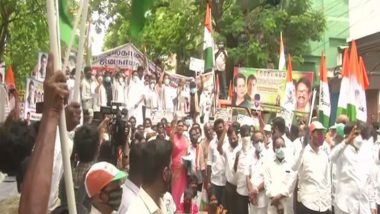 Chennai, July 27: Amid the political crisis in Rajasthan, Tamil Nadu Congress MPs and district secretaries staged a protest titled "Save Democracy and Save Constitution" against the BJP near the Raj Bhavan in Chennai on Monday. As part of a nationwide protest held by the Congress party, the protesters demonstrated their support for the Rajasthan government.

The protest was led by Congress MP Vasantha Kumar. Party leaders and workers were seen holding placards with the title "Save Democracy and Save Constitution". However, the protesters were seen flouting COVID-19 social distancing norms. Rajasthan Chief Minister Ashok Gehlot had on Saturday said that the Congress party would approach the President and if required, will also stage a protest outside the Prime Minister's residence in connection with the ongoing situation in Rajasthan. Rajasthan Political Crisis: P Chidambaram Says Hope President Ram Nath Kovind Intervenes and Instructs Governor Kalraj Mishra to Convene Assembly Session.

The Rajasthan Congress is in turmoil after simmering differences between Sachin Pilot and Chief Minister Ashok Gehlot came out in the open. Pilot was removed as the deputy chief minister and the state unit chief of Congress. The Congress has accused the BJP of indulging in horse-trading to bring down the Gehlot government. The BJP has rejected the allegations.