Popular YouTuber Madhan Manickam, who was booked by the Tamil Nadu police for uploading abusive content, was arrested from Salem in Tamil Nadu on Friday morning. 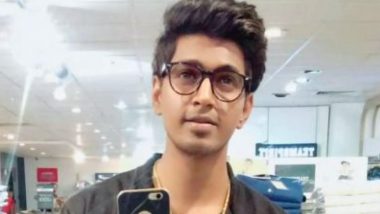 Chennai, June 18: Popular YouTuber Madhan Manickam, who was booked by the Tamil Nadu police for uploading abusive content, was arrested from Salem in Tamil Nadu on Friday morning.

The YouTuber was brought to Chennai by road after the arrest in Dharmapuri. He will be produced before a magistrate court, according to Chennai city police.  Delhi Youtuber Gaurav Sharma Arrested For Animal Cruelty For Floating Pet Dog Using Helium Balloons (Watch Video)

Madhan Manickam's wife Kruthika was arrested by the Chennai police on Wednesday for the same crime -- violation of IT rules of uploading abusive content.

She was remanded to judicial custody along with her baby.

The Cyber Crime Wing of the Tamil Nadu police have registered a case under sections of the IPC, Information Technology(IT) Act, and the Indecent Representation of Women Prohibition Act, 1986. Police received more than 100 complaints against Madhan for using abusive content on their YouTube Channel.

The channels had more than 8 lakh subscribers. Cyber Crime Wing officers told IANS that several juveniles, including school-going children were his fans and watched the content.

(The above story first appeared on LatestLY on Jun 18, 2021 02:40 PM IST. For more news and updates on politics, world, sports, entertainment and lifestyle, log on to our website latestly.com).