Kolkata Police virtually questioned BJP leader and Mithun Chakraborty on a complaint lodged against him alleging that the actor was responsible for inciting violence through one of his speeches made during a BJP campaign. 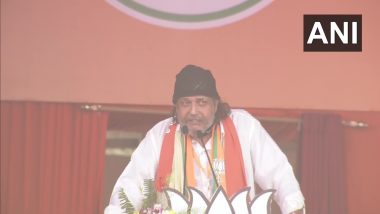 Kolkata, June 16: Kolkata Police virtually questioned BJP leader and Mithun Chakraborty on a complaint lodged against him alleging that the actor was responsible for inciting violence through one of his speeches made during a BJP campaign.

A complaint filed in Maniktala police station against him, has accused the actor of inciting post-poll violence in West Bengal through his speeches. Chakraborty moved the Calcutta High Court for quashing the case against him.  BJP’s Mithun Chakraborty Virtually Questioned by Kolkata Police for His Controversial Speech During West Bengal Polls

But the court asked him to appear for questioning through video conferencing.

In the complaint it has been mentioned that the popular actor has used phrases like "marbo ekhane lash porbe shoshane (Will hit you here and the body will land in the crematorium)" and "ek chobole chobi (one snake bite and you will turn into a photograph)" at a rally in Kolkata after he joined the BJP on March 7.

The complaint also mentioned that these dialogues were enough to incite violence.

The national award-winning actor, however, told the court that he had just uttered popular dialogues from his films.

The actor claimed that the utterances of such film dialogues were only recreational and that he is innocent and in no way connected with any offence as alleged by the complainant.

After the hearing the Calcutta High Court directed Chakraborty to provide his e-mail address to the state so that he can make himself available for questioning through video conferencing. Kolkata police following the direction of the court have started questioning Chakraborty.

(The above story first appeared on LatestLY on Jun 16, 2021 01:24 PM IST. For more news and updates on politics, world, sports, entertainment and lifestyle, log on to our website latestly.com).