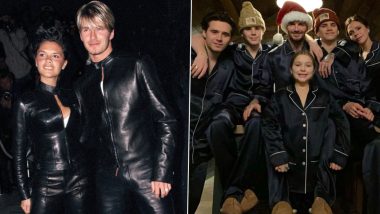 Ace footballer David Beckham took to social media to wish wife Victoria on their marriage anniversary on Sunday. Uploading pictures of himself with Victoria and their four children, wearing colour coordinated outfits, he captioned the image: "22 years later, still matching outfits Happy anniversary love u so much and thank you for giving me our amazing kids so we can all wear the same." Friends Reunion Special: From David Beckham to BTS, Here Is Every Star You Will See in the Episode.

Victoria met David when she was part of the popular girl band Spice Girls, before she decided to take up fashion designing as a career choice. David Beckham Takes Zoom Calls In Underwear, Reveals Wifey Victoria Beckham.

Victoria and Beckham together have four children - sons Brooklyn, Romeo, and Cruz and daughter Harper.

(The above story first appeared on LatestLY on Jul 04, 2021 06:42 PM IST. For more news and updates on politics, world, sports, entertainment and lifestyle, log on to our website latestly.com).