Who do you think won this fashion race? 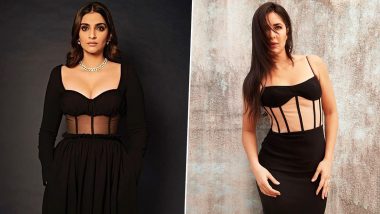 A black corset dress is a dream for any fashion lover out there. It looks charming, is perfect for any occasion and there's nothing to not like about it. While the obsession for corset dresses is steadily increasing among our Bollywood beauties and we have seen some ravishing designs in the past, Katrina Kaif and Sonam Kapoor's recent attempts have made our eyeballs pop out and how! While the Neerja actress is known for being a devotee to fashion and Kat's style outings are getting better with each passing day, it's not very often that we get to see a fashion faceoff between these two. Sonam Kapoor Channels her Inner Princess in the New Photoshoot of Harper's Bazaar Arabia (View Pics).

It's more about their individual fashion preferences than anything else. While Sonam is bolder and believes in having a bit of OTT, Katrina is more stylish and chic in her choices. So when we had a case of a similar black corset dress finding a place in their wardrobes, we had to get excited. The Khoobsurat girl picked her choice for Malang's premiere night while Katrina sizzled in it during the IIFA press conference.

Katrina's black sheer corset dress from Rasario looked bomb and we genuinely think the actress should have allowed it to remain sheer! The idea of covering her sheer part with a matching skin colour inner is so 80s and why do that? She did ruin her otherwise sultry look and we could be, no wait, we are slightly disappointed by it. Nonetheless, the choice was marvellous and it went well with her lean figure. Fashion Faceoff: Kareena Kapoor Khan or Malaika Arora - Who Shone like the Brightest Star in Atelier Zuhra Creation?

Sonam's black corset dress with a sweetheart neckline was equally thrilling and the lady carried it with so much panache. Being a fashionista, there's a rarely a time when she goes wrong with her fashion choices and usually, her attempts hit the right note. We did love her pick for the Malang premiere and the way she styled it overall.

While we personally think Sonam's outing was slightly better than Kat's, what's your take on it? Do you support our view or think it's the other way around? Let us know by voting in for your desired choice.

(The above story first appeared on LatestLY on Mar 04, 2020 05:06 PM IST. For more news and updates on politics, world, sports, entertainment and lifestyle, log on to our website latestly.com).