Mom-to-Be Anushka Sharma’s Maternity Style is all About Delicate Creams and Peaches in This Latest Pic!

Flaunting her pregnancy glow, mom-to-be Anushka Sharma on Monday treated fans to a glowing picture in a peach attire while she chilled sitting on a couch. Check it out. 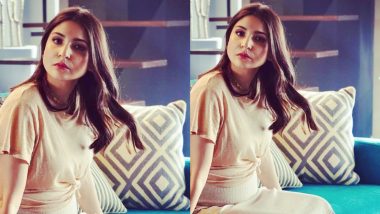 Flaunting her pregnancy glow, mom-to-be Anushka Sharma on Monday treated fans to a glowing picture in a peach attire while she chilled sitting on a couch. The 'Rab Ne Bana Di Jodi' star posted the sun-kissed picture on Instagram, in which the actor is seen sporting a minimal makeup look and flaunted her lightly curled luscious locks that are left to flow in the air.

Sharma captioned the picture as, "Hey." Anushka Sharma Is Pregnant! And Her Polka Dot Maternity Dress Comes With A Heavy Price Tag.

With the post hitting the photo-sharing platform, celebrity followers including filmmaker Homi Adajania and 15 lakh fans liked it. Many of the fans showered love on the actor by leaving the heart and lovestruck emojis in the comments section. Anushka Sharma’s Maternity Swimsuit Is Just for Rs.2700 and Thrifty Chic!

Of late, the NH 15 star has been updating fans on her activities by sharing pictures and videos on social media. Earlier, Anushka Sharma shared a glimpse of her work schedule, as she stepped out in style to start shooting for her brand commitments.