Check out Parineeti Chopra's multiple fashion outings for The Girl On The Train promotions. 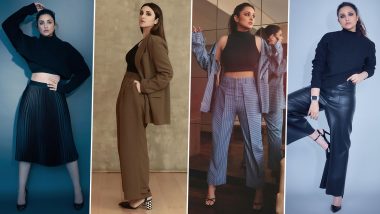 Parineeti Chopra's The Girl On The Train may have received a mixed reaction from netizens but the girl certainly nailed her promotional wardrobe for the same. Parineeti's outings were chic and trendy, to say the least. In fact, it was a refreshing change to see her ditch her usual separates and pick something so unusual and powerful instead. From power dressing that isn't too formal to something as casual as a sweater and skirt, Chopra did establish a place for herself in the fashionista category. Parineeti Chopra's Maldives Holiday Pictures are all About Sun, Sand and Sea!

Parineeti Chopra's fashionable choices did strike a chord with fashion enthusiasts like us. We liked her black separates and her brown pantsuit that was smartly paired with a halter black casual top. The styling was kept very simple with the emphasis being on its subtlety. With no loud colours or dark prints, the styling was planned keeping her movie's character in mind. Just like in the movie, the theme of her outings was all dark and cold but nonetheless, it was delightful and worthy of your attention. Parineeti Chopra Birthday Special: The Sunshine Girl’s Effervescent Styles, From Being Dressy Chic to Oozing Eloquent Elegance!

Check out all Parineeti Chopra's outfits below...

Black on Black - a Classic

And She Continues Slaying

Parineeti Chopra's next line up of releases includes Saina Nehwal biopic and Animal with Ranbir Kapoor. The latter is being helmed by Kabir Singh maker Sandeep Reddy Vanga and also stars Anil Kapoor in the lead role. Parineeti was also supposed to star in Bhuj: The Pride of India but decided to exit it to make time for her preparation for Saina's biopic. We bet her efforts would be appreciated and that she'll end up making more such interesting announcements in the coming days.

(The above story first appeared on LatestLY on Feb 28, 2021 12:00 PM IST. For more news and updates on politics, world, sports, entertainment and lifestyle, log on to our website latestly.com).