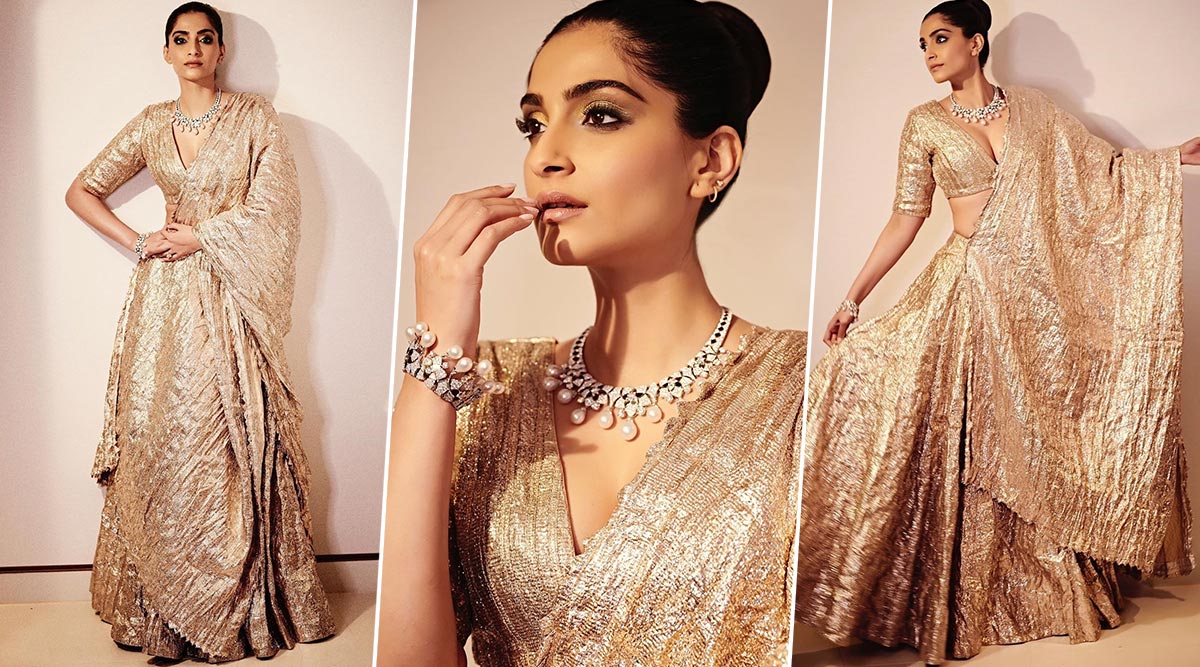 Sonam Kapoor, a fashionista should be probably credited for introducing us to that very term. She believes in carving a niche for herself via her different fashion attempts that are bound to find a 'forever' place in your heart. A lady with a refined taste, she's often the girl we discuss for having an impeccable wardrobe at her disposal. A lover of haute couture and an ardent Elie Saab loyalist, Sonam loves playing with brands while we struggle to get their pronunciation right. She's a delight, a muse for any designer and a fashion icon for so many.  Sonam Kapoor Ahuja Is an Epitome of Ethnic Resplendence in Raw Mango!

Sonam Kapoor's recent ethnic pick comes in a gold Itrh outfit, something that Kareena Kapoor Khan and Malaika Arora have worn and attempted before. The stunning lehenga with a matching deep-cut neckline choli and a dupatta looked stunning on this Khoobsurat girl and there's no denying that she nailed it to the hilt. The outfit looked royal and there's no way she could have wrong with it.

Sonam further accessorised her look by picking a stunning diamond and pearl necklace with no earrings. She prefered her hair tied in a bun with the addition of highlighted cheeks, shimmery eyelids, curled eyelashes and pink lips. She did look like a million bucks but hey, isn't that always when it comes to her? Sonam Kapoor Rocks The Manish Malhotra Saree In a Majestic Photo-Shoot By The Shore (View Pics).

After picking a rather ravishing black corset dress at the Malang screening and later a stunning Manish Malhotra saree, Sonam was determined to sparkle and shine at the launch of Jannah collection, a five-petal story by Bvlgari. When it comes to Sonam, you can be rest assured of one thing - she'd always get her fashion right and it would be on point.