India celebrates its illustrious Army Day on January 15 annually. The date January 15 is chosen because, on this day, Field Marshal Kodandera M. Cariappa took over as the Commander-in-Chief (C-o-C) of Indian Army in the year 1949. He replaced British officer General Sir Francis Butcher and became the first Indian C-o-C of independent India. 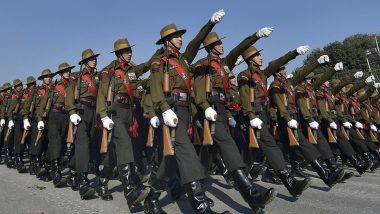 India celebrates Army Day every year in commemoration of those soldiers who laid down their lives in protecting the sovereignty of our country. The Indian Army Day is also celebrated to honour the strength and prowess of the Indian armed forces. Both Central and State governments observe the national event of Indian Army Day amidst grandeur festivities. If you want to know more about the Indian Army Day 2021 – its date, observance, significance, history, and more – then you have reached the right place.

What Is the Date and History of Indian Army Day 2021?

India celebrates its illustrious Army Day on January 15 annually. The date January 15 is chosen because, on this day, Field Marshal Kodandera M. Cariappa took over as the Commander-in-Chief (C-o-C) of Indian Army in the year 1949. He replaced British officer General Sir Francis Butcher and became the first Indian C-o-C of independent India.

The celebrations of the Indian Army Day are grand and extravagantly. There are parades carried out at all the Army Headquarters and offices in different parts of the country. Special celebrations take place in the national capital Delhi. The Chiefs of Indian Navy, Indian Airforce, and Indian Army pay rich tributes at the Amar Jawan Jyoti memorial at India Gate, in Delhi.

There are military shows and parades across the country. The country's latest and powerful weapons and contingents are on display in these parades. However, the day's highlight is the primary Indian Army Day Parade at the Cariappa Parade ground in Delhi cantonment.

The government distributes gallantry awards and medals to the brave soldiers of the Indian armed forces. Last year, Captain Tania Shergill, of the Corps of Signals, became the first Indian female officer to command the Army Day parade in Indian history.

What Is the Significance of Indian Army Day?

The Indian Army is one of the largest armies in the entire world. Its prowess, manpower, and advancement are at par with the world's superpowers. Given the number of wars that it has successfully fought, the contribution to UN's Peacekeeping Force, and other international commitments, the Indian Army has always succeeded with flying colours.

The soldiers who sacrificed their lives protecting the borders, and their bereaving families have contributed a lot in safeguarding our country's interests. It would be only fitting to commemorate their lives and achievements, and hence the observance of Indian Army Day is an appropriate and deserving tribute to them.

As January 15 nears, we at LatestLY wish you all a very "Happy Army Day 2021". We thank enough to the brave martyrs of our country who protected our motherland in life and death.

(The above story first appeared on LatestLY on Jan 13, 2021 04:30 PM IST. For more news and updates on politics, world, sports, entertainment and lifestyle, log on to our website latestly.com).