Emancipation Day in Jamaica 2020: Know History, Significance of the Day That Marks the End of Slavery in the British Empire 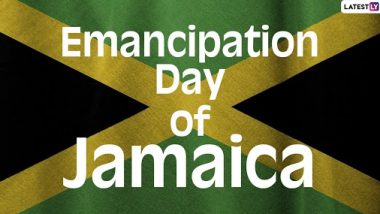 The Emancipation Day in Jamaica is marked on August 1 and is an official public holiday there. Following independence in 1962, Emancipation Day was replaced by Independence Day, which was observed on the first Monday in August. The special day is celebrated as the holiday marks the end of slavery in the British Empire. The first week of August is special for Jamaicans around the world.

The British had allowed the widespread practice of slavery. In 1772, the ruling in the case of Somerset v Stewart determined that slavery was unsupported by the common law in England and Wales. Slavery was finally abolished throughout the British Empire by the Slavery Abolition Act 1833, which came into effect on August 1,  1834.

According to history, in 1998, Emancipation Day was reinstated by Prime Minister PJ Patterson as a public holiday on 1 August, follow a six-year campaign led by the late Professor Rex Nettleford.

On August 1, the island celebrates its Emancipation Day- the day when Africans were freed from slavery on the island. The Emancipation Day celebrations culminate with the Grand event in Jamaica every year. Local musicians, dancers, and other creatives showcase their talents at the event that highlights the best of Jamaican culture. The first country in the world to observe a public holiday for Emancipation Day was Trinidad and Tobago, when Emancipation Day replaced Discovery Day in 1985.

The annual celebrations are not only limited to Jamaicans living only in Jamaica, it is celebrated across the diaspora. Jamaicans host events to celebrate the special days in their respective states and cities.

(The above story first appeared on LatestLY on Aug 01, 2020 08:30 AM IST. For more news and updates on politics, world, sports, entertainment and lifestyle, log on to our website latestly.com).