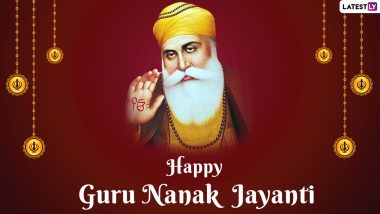 I bow to Sri Guru Nanak Dev Ji on his Parkash Purab. May his thoughts keep motivating us to serve society and ensure a better planet.

Union Home Minister Amit Shah, wishing people on Guru Nanak Jayanti, wrote: "Guru Nanak's thoughts will always give us the strength to walk on the path of religion and national interest." Guru Nanak Jayanti celebrates the birth of the first Sikh Guru and is considered one of the most sacred festivals among Sikhs. The day is celebrated on the full moon day of the Kartik month as per the Hindu calendar. It is also marked as Kartik Poornima.

(The above story first appeared on LatestLY on Nov 30, 2020 09:05 AM IST. For more news and updates on politics, world, sports, entertainment and lifestyle, log on to our website latestly.com).