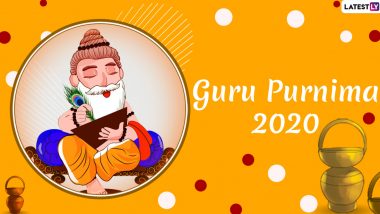 Guru Purnima also known as Vyasa Purnima is a day to respect teachers and gurus. The observance commemorates the goodness of spiritual gurus and teachers in the Hindu culture. Guru Purnima falls during the Purnima Tithi, full moon day of the Hindu month of Ashad which is believed to be the birth anniversary of the Great Indian sage Vyasa. He is also known as he classified into four including the Veda Vyasa,  Rig Veda, Yajur Veda, Sama Veda and Atharva Veda. He had four chief disciples - Paila, Vaisampayana, Jaimini and Sumantu who carried his legacy ahead. Guru Purnima 2020 will be celebrated on July 5 this year. Guru Purnima 2020: Mathura Administration Cancels City's Fair for First Time in 400 Years Amid COVID-19 Pandemic.

On Guru Purnima, devotees perform Vyasa Puja to honour the contributions of the teacher. The Guru Purnima 2020 coincides with the Penumbral Lunar Eclipse that falls on July 5. Vyasa also authored the Holy Shrimad Bhagavata and the Hindu holy book, Mahabharata. The Guru of Gurus Dattatreya is said to have been taught by Sage Vyasa. Hence, the day is of great importance for Hindus.

According to legends, Sage Veda Vyasa was born to Satyavati and Sage Parashar on this day. He is believed to be the author of the great Indian epic, the Mahabharata and also considered the epitome of learning and knowledge. In Yogic culture, Lord Shiva is believed to be the first Guru or Yogi, who gave the knowledge of Yoga to the Saptarishis (the seven sages). As per legends, Lord Shiva appeared as a Yogi in the Himalayas and gave Yogic learnings to the seven sages.

(The above story first appeared on LatestLY on Jul 02, 2020 06:54 PM IST. For more news and updates on politics, world, sports, entertainment and lifestyle, log on to our website latestly.com).