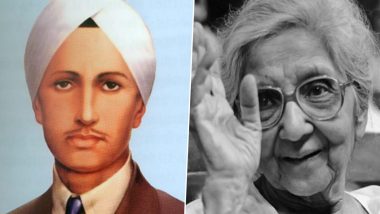 India will celebrate its 74th Independence Day on August 15. On this day in 1947, India became a free nation. The country was a British colony for almost 200 years. The day marks the end of British rule in 1947 and the establishment of a free and independent Indian nation. The first war of Independence was fought in 1857 when several Indian princely states fought together against the British East India Company. Shaheed Kartar Singh Sarabha 124th Birth Anniversary: Here Are Interesting Facts About One of The Noted Freedom Fighters of India.

Many Indians sacrificed their lives to make the country an independent nation. On every Independence Day, countrymen pay tribute to the heroes of freedom struggle. People only know about few freedom fighters like Mahatma Gandhi, Bhagat Singh, Chandrashekhar Azad and Netaji Subhash Chandra Bose. There were many others who fought for India's freedom, but not much was written about them. Shaheed Udham Singh's 80th Martyrdom Day: Facts About The Freedom Fighter Who Avenged Jallianwala Bagh Massacre by Killing General Michael O’Dwyer.

Here Are Some Unsung Heroes of Indian Freedom Struggle:

Kartar Singh Sarabha: He was a revolutionary who fought for the Indian freedom struggle. Sarabha was 17 years old when he became a member of the Ghadar Party. Singh was executed at Lahore in November 1915 when he was just 19 years of age.

Aruna Asaf Ali: She is widely remembered for hoisting the Indian National flag at the Gowalia Tank maidan in Bombay during the Quit India Movement. She also participated in public processions during the Salt Satyagraha.

Lakshmi Sahgal: She was an officer of the Indian National Army formed by Netaji Subhash Chandra Bose. She was the Minister of Women's Affairs in the Azad Hind government. Sahgal is commonly referred to in India as "Captain Lakshmi", a reference to her rank when taken prisoner in Burma during the Second World War.

Bhikaji Cama: She was one of the prominent figures in the Indian independence movement. Cama was also a figure for gender equality. She unfurled the Indian flag at the International Socialist Conference at Stuttgart in Germany, 1907.

Tirupur Kumaran: He was an Indian revolutionary who fought against British rule. Kumaran founded Desa Bandhu Youth Association and led protests against the British. He died from injuries sustained from a police assault on the banks of Noyyal River in Tiruppur during a protest march.

Kamaladevi Chattopadhyay: She was an Indian social reformer and freedom activist. She was most remembered for her contribution to the Indian independence movement for being the driving force behind the renaissance of Indian handicrafts, handlooms, and theatre in independent India.

Senapati Bapat: Pandurang Mahadev Bapat was popularly known as Senapati Bapat after he led the Mulshi Satyagraha. In 1912, he was arrested in connection with the Alipore bombing of 1908. Later, he re-aligned himself with Mahatma Gandhi's vision of swaraj.

On August 15, the Prime Minister hoists the Indian flag on the ramparts of the historical site of Red Fort in Delhi. Flag hoisting ceremonies also take place in every state capital where Chief Ministers unfurl the national flag. Government buildings are illuminated in tricolour lights.

It has been 72 years since India received Independence from the clutches of the British empire. Meanwhile, this year PM Narendra Modi will hoist the national flag on the ramparts of Red Fort for the seventh time.

(The above story first appeared on LatestLY on Aug 14, 2020 10:00 AM IST. For more news and updates on politics, world, sports, entertainment and lifestyle, log on to our website latestly.com).