There is an entire series of PM Modi, which animatedly shows him performing different yogasanas and also highlights their benefits. 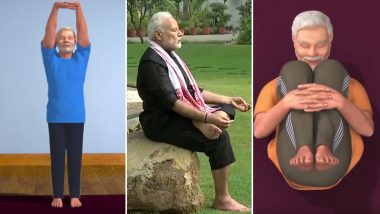 International Day of Yoga is celebrated annually on June 21. Yoga is an ancient practice comprising of not only physical exercise forms but also helps in mental and spiritual disciplines. There are many benefits of this traditional practice which symbolises the union of body and consciousness. Over the years the popularity of Yoga is definitely growing. India's PM Narendra Modi was instrumental in marking a start of these celebrations on a global scale. He had proposed the idea of marking such a day. On 11 December 2014, the United Nations proclaimed 21 June as the International Day of Yoga by resolution 69/131. It essentially aims to raise awareness worldwide of the many benefits of practising yoga. PM Modi time and again advocates the benefits of the practice. Thus we have compiled a few videos and pictures of Narendra Modi doing yoga. International Yoga Day 2019: PM Narendra Modi to Lead Main Event in Ranchi On June 21.

Every Yoga Day there is a specific theme to the celebrations. This year's theme for the International Day of Yoga is 'Climate Action.' Narendra Modi has already been tweeting different yogasanas ahead of the celebrations. Once in a while, he also puts up videos of him doing Yoga. In fact, an active supporter of Yoga, he had launched a video series of Yogasanas last year.

PM Modi Shares Video of Him Doing the Tadasana:

Here Are Some Pictures of Narendra Modi's Celebrations of Yoga Day 2018:

There is an entire series of PM Modi, which animatedly shows him performing different yogasanas and also highlights their benefits. He has even tweeted the benefits of Yoga and different asanas. The Indian PM has time and again urged people to make yoga an integral part of their lives and also inspire their loved ones to do the same.

(The above story first appeared on LatestLY on Jun 20, 2019 04:43 PM IST. For more news and updates on politics, world, sports, entertainment and lifestyle, log on to our website latestly.com).