Janmashtami 2018: Books on Lord Krishna That You Must Read

It should come as no surprise that lord Krishna has always fascinated writers. From philosophers to experts on religious studies and even biographers have time and again tried to look at the life of Krishna from fresh perspective. 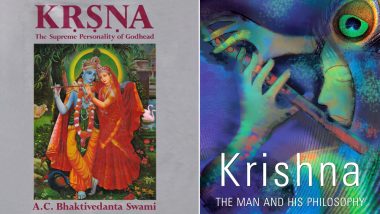 Cover of the book KRSNA- The Supreme Personality of God and Krishna- The Man and his Philosophy | (Photo Credits: Wikimedia Commons)

Janmashtami, the festival celebrating the birth of Lord Krishna will be observed on September 3. The festival is an important occasion for devotees of Lord Krishna, who wait all year long for the special day. Lord Krishna, who is considered as Sampurna Avatar, roughly translated as the complete incarnation of God (Vishnu), is highly revered by not just his devotees but also the experts of mythology as many tales that revolve around Krishna have symbolic and moral values.

Let us have a look at some of the books on Lord Krishna that is worth treasuring for those who want to know more about him:

1. Krishna- The Man and his philosophy by Osho

Osho, also known as Acharya Rajneesh, was one of the important figures in 20th century India. Some called him a godman, some philosopher and some thought he was a walking example of contradiction, but what cannot be disputed is his expertise in the field of letters.

Osho called Krishna as one of the most important people to have walked on the face of the earth and wrote a book on him titled Krishna- The Man and His Philosophy. But interestingly, in the book, he does not treat Krishna a God figure but evaluates his actions and legends associated with him from the point of view of a human being. “The truth is, Krishna was born much ahead of his time. All great persons are born ahead of their time, and all insignificant people are born after their time. It is only mediocre people who are born in their time” said Osho about Krishna.

A must-read for anyone interested in learning about Krishna. Another sample quote from the book: "Life is meant to be a celebration; celebration is its central note. If someone asks you, better ask this question of yourself: Do I live to work or work to live? Then the answer will become very clear to you, and you will move much closer to Krishna. You do everything so you live, and not so you live to work and work meaninglessly. And to live you don’t need to do much; too much doing has no meaning.”

2. Bhagavad-Gītā As It Is

The Bhagavad Gita and Lord Krishna are inseparable. Bhagavad Gita As It Is is a translation and commentary of the Gita, by A. C. Bhaktivedanta Swami Prabhupada, founder of the International Society for Krishna Consciousness (ISKCON), commonly known as the Hare Krishna movement in India and abroad.

The Bhagavad Gita emphasises a path of devotion toward the personal God, Krishna. It was first published in 1968 by Macmillan Publishers and is now available in nearly sixty languages, primarily promoted and distributed by followers of ISKCON.

The book is considered by many Vedic scholars to be one of the finest literary works of Vaishnavism in English and places Lord Krishna at the heart of this treasure trove.

It should come as no surprise that Lord Krishna has always fascinated writers. From philosophers to experts on religious studies and even biographers have time and again tried to look at the life of Krishna from a fresh perspective. And one of the primary reasons is because it's difficult to define the personality of Lord Krishna in one sentence or even in one book. However, the above-mentioned works will definitely help the reader in giving a glimpse into Krishna -- not only the god but also the man and the avatar.

(The above story first appeared on LatestLY on Aug 30, 2018 05:03 PM IST. For more news and updates on politics, world, sports, entertainment and lifestyle, log on to our website latestly.com).