LGBTQ Pride Month 2020 Dates and Significance: Why Pride Month Is Celebrated in June? Here’s the History Related to the Revolutionary Month of the Year 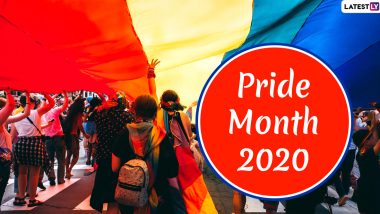 Pride Month 2020 has begun from today, June 1. Colourful, uplifting parades with floats and celebrities, joyous festivals, workshops, picnics and parties are among the principal components of LGBTQ+ Pride Month, celebrated in June. Pride Month is a significant observation for people in the United States, as it honours the Stonewall riots of 1969 in New York. In addition, people across the world, arrange for celebrations to mark this event, as it stands to uplift the LGBTQ+ rights and ongoing pursuit of equal justice globally. As we celebrate Pride Month 2020 today, in this article we bring you the dates, significance and history behind the choice of June as Gay Pride Month. Pride Day 2020 Date: History, Significance and Celebrations to Observe This Revolutionary Day, Marking the Start of LGBT Pride Month in June.

The LGBTQ+ Pride Month 2020 is celebrated for the entire month of June. Yes, the whole month is celebrated as Pride Month, significantly across the United States. It was Brenda Howard, an activist known as the “Mother of Pride” who initiated the idea for a week-long series of events around Pride Day, which became the genesis of the annual LGBTQ+ Pride celebrations that are now held across the world every year in June.

The event that catalysed the gay rights movement in the US came in June 1969 in NYC’s Greenwich Village, ay the Stonewall Inn. Police raided the popular gathering place for young gay men, lesbians, bisexuals and transgender people. The crowd outside that watched the bar’s patrons being herded into police vans became enraged. Although the cops reinforcements dispersed the crowd that day, riots waned and waxed outside the bar for the next five days. This Stonewall riots provided the spark that ignited that gay rights movement in the US. Pride Parade 2020 Cancelled! NYC Cancels LGBTQ Pride March and Puerto Rican Day Parade for the First Time in History Due to COVID-19 Spread.

The following year on June 28, the first anniversary of Stonewall riots took place. The march at the time was named the Christopher Street Liberation Day march after the street that was the epicentre of the NYC’s gay community and from which the procession originated. “Gay Power” was the proposed slogan for the march, but the members felt great pride in their sexual identity. It was then decided that March’s theme would be “Gay Pride.” This is how the month of June was chosen to celebrate Gay Pride Month.

Gay Pride Month has a varied history. This year the Gay Pride Parades are all cancelled because of the pandemic, but organisations have come up with ways to celebrate the event virtually.

(The above story first appeared on LatestLY on Jun 01, 2020 02:21 PM IST. For more news and updates on politics, world, sports, entertainment and lifestyle, log on to our website latestly.com).