In this article, we will know more about the Stonewall Riots, Pride Day and more detailed information such as Pride Day 2020 date, its history, significance and celebrations to observe this revolutionary day, marking the start of Pride Month in June. 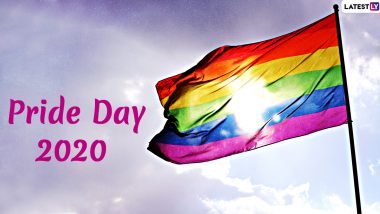 It is Gay Pride Day 2020 today, June 1. The celebration of Pride Day 2020 will be followed by Pride Month, which is observed every year in June. With the outbreak of COVID-19 pandemic, there will not be any Pride Parade this year, but the month gives us all an opportunity to know why we celebrate Pride Day, followed by Pride Month. Every year, June is celebrated as Pride Month to pay tribute to those involved in the Stonewall Riots. In this article, we will know more about the Stonewall Riots, Pride Day and more detailed information such as Pride Day 2020 date, its history, significance and celebrations to observe this revolutionary day, marking the start of Pride Month in June. Pride Parade 2020 Cancelled! NYC Cancels LGBTQ Pride March and Puerto Rican Day Parade for the First Time in History Due to COVID-19 Spread.

Every year, Pride Day is celebrated on June 1, followed by a month-long celebration of Pride Month in the entire month. Brenda Howard, a bisexual activist, known as the ‘Mother of Pride’ originated the idea for a week-long series of events around Pride Day, which is gradually observed as month-long observation of Pride Month, to honour those who fought for the rights of LGBTQ+ community.

On June 28, 1969, New York police raided the Stonewall Inn, a gay club in Greenwich Village, which resulted in bar patrons, staff and neighbourhood residents rioting onto Christopher Street outside. Among many leaders of the riots was a black, trans and bisexual woman, Marsha P. Johnson who was leading the movement, which continued over six days. The message was clear; protestors demanded the establishment of places where LGBTQ+ people could go and be open about their sexual orientation without fear of arrest.

In the 1980s, there was a major cultural shift in the Stonewall Riot commemorations. Marches and parades were taken over by more organised and less radical elements of the gay community. The month of June was chosen as LGBT Pride Month to honour the Stonewall Riots. Many Pride events are held during this month to recognise the impact of LGBT people has had in the world. US former President, Bill Clinton first declared June as “Gay & Lesbian Pride Month” in 199 and 2000. President Barack Obama declared June as LGBT Pride Month in the United States. The month-long celebration is also seen in other parts of the world.

With the celebration of Pride Day 2020, Pride Month will be celebrated in June. Although the Pride Parades significantly held in New York are being cancelled because of the pandemic, virtual observation through social media is expected to be held in the entire month.

(The above story first appeared on LatestLY on Jun 01, 2020 08:49 AM IST. For more news and updates on politics, world, sports, entertainment and lifestyle, log on to our website latestly.com).