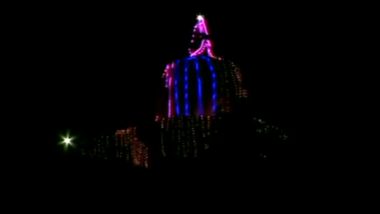 Srinagar, February 21: On the auspicious occasion of Mahashivratri, the Shankaracharya Temple in Jammu and Kashmir’s Srinagar was illuminated with colourful lights on Friday. The video of the Shankaracharya Temple decorated with light was shared by news agency ANI. On Friday morning, devotees thronged the temple to seek blessings of Lord Shiva. Mahashivratri is one of the biggest festivals celebrated by Kashmiri Pandits. Happy Maha Shivratri 2020 Messages and Wishes: WhatsApp Quotes, Lord Mahadev GIF Images, Shivratri Greetings to Send on 'Great Night of Shiva'.

The Shankaracharya Temple is also known as the Jyeshteshwara Temple. It is situated on top of the Shankaracharya Hill on the Zabarwan Range. The temple believed to be dated back to 200 BC as a Buddhist construction. It was visited by Adi Shankara after which it got its present-day name.

Mahashivratri is one of the most significant festivals for the people of the Hindu religion. The day is celebrated in remembrance of the sacred union (marriage) of Lord Shiva and Goddess Parvati. Some devotees also observe the festival as a mark of respect for Lord Shiva’s selfless deed of consuming the pot of poison that emerged at the time of Samudra Manthan. Maha Shivratri 2020: Narendra Modi, Ashok Gehlot, Ravi Shankar Prasad And Other Politicians Extend Warm Greetings on the Pious Occasion.

(The above story first appeared on LatestLY on Feb 21, 2020 10:45 PM IST. For more news and updates on politics, world, sports, entertainment and lifestyle, log on to our website latestly.com).