Mahatma Gandhi 72nd Death Anniversary: What is Martyrs' Day, Who Killed Bapu And Why Was He Assassinated?

The Year 2020 marks the 72nd death anniversary of the “Father of the Nation” Mahatma Gandhi. The day is also known as the Martyrs’ Day, which is observed every year on January 30. Mohandas Karamchand Gandhi popularly known as Mahatma Gandhi, was murdered on January 30, 1948, by Nathuram Godse 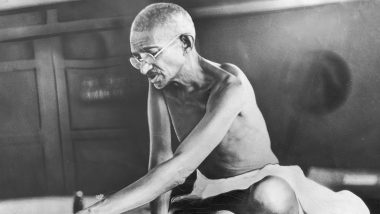 The year 2020 marks the 72nd death anniversary of the “Father of the Nation” Mahatma Gandhi. The day is also known as the Martyrs’ Day and is observed every year on January 30. Mohandas Karamchand Gandhi, popularly known as Mahatma Gandhi, was murdered on January 30, 1948, by Nathuram Godse, a Hindu Mahasabha leader. Gandhi led India’s freedom struggle with his non-violence movement. He was also called 'Bapu' by his followers. Martyrs' Day (Shaheed Diwas) 2020 in India: Date, Significance and History of Mahatma Gandhi’s Assassination Day.

Every year on January 30, top politicians cutting across political lines pay tribute to Mahatma Gandhi at Rajghat - the memorial at the site where he was cremated. Various events are organised showcasing the life history of Gandhi and his contribution in the Indian freedom struggle. Martyrs’ Day 2020: Call For Human Chain on January 30, Mahatma Gandhi's Death Anniversary, in Delhi to Protest Against CAA and NRC.

Why is Martyrs' Day Celebrated?

On the morning of January 30, 1948, Gandhi addressed the prayer meeting at Birla House in the national capital, as per his routine schedule. After the prayer, he was meeting his supporters. Masqueraded among them were three men, including Nathuram Godse. He approached towards Gandhi, took out his revolver and fired three bullets at him. "Hey Ram" were the last words of Mahatma Gandhi.

Why was Mahatma Gandhi Assassinated?

Godse had later justified his crime. He contested Gandhi's views on  Partition and held Bapu responsible for the bloodshed. "I do say that my shots were fired at the person whose policy and action had brought rack and ruin and destruction to millions of Hindus," Godse was quoted as telling the court.

Mahatma Gandhi was born on October 2, 1869, into an Indian Gujarati Hindu Modh Baniya family in Porbandar to Karamchand Gandhi and Putlibhai. He was married to Kasturba Gandhi when he was 14 years old. Gandhi, at the age of 23, became aware of the plight of downtrodden when he was in South Africa.

After returning to India in 1915, he jumped into the freedom struggle and converted it into a mass movement. Mahatma Gandhi took leadership of the Congress in 1920 and kept representing the party during talks with the British till he resigned in 1934. He led several non-violent moments including Champaran agitation, Khilafat movement, Non-co-operation, Civil Disobedience Movement and Quit India Movement.

Gandhi Jayanti is celebrated as the International Day of Non-Violence. The UN General Assembly passed a resolution regarding this in 2007. Bapu’s principles and ideals still hold great relevance in the modern era. The Father of the Nation had set an example of simple living and high thinking and proved to the world that non-violence is the most powerful weapon to fight against injustice.

(The above story first appeared on LatestLY on Jan 30, 2020 11:21 AM IST. For more news and updates on politics, world, sports, entertainment and lifestyle, log on to our website latestly.com).