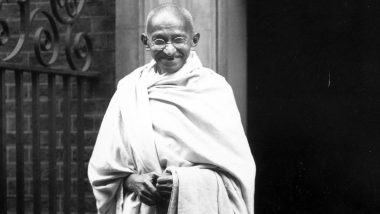 When we talk about India and our struggle and journey to Independence, some names instantly pop up. They need no introduction. The one person who tops this list has to be Mahatma Gandhi. Father of the nation, Mohandas Karamchand Gandhi has played a crucial role in making India the country that we currently know. January 30 marks the death anniversary of this great leader and Mahatma Gandhi Punyatithi is observed as Martyr's Day or Shaheed Diwas in India every year.

Mahatma Gandhi was assassinated on January 30, 1948, and every year this date serves as a reminder of Gandhi's teachings of non-violence, truth and bravery and promotes all that he stood for. Mahatma Gandhi Punyatithi is a day that people choose to pay tribute to the Father of our nation and holds great significance. It is observed as a Martyrs Day in India. Martyrs’ Day 2020: Call For Human Chain on January 30, Mahatma Gandhi's Death Anniversary, in Delhi to Protest Against CAA and NRC.

When is Martyr’s Day in India, The Day Mahatma Gandhi Punyatithi is Observed?

Gandhi Punyatithi is observed on the death anniversary of Mahatma Gandhi, i.e., January 30. This day is marked as a tribute to the legendary leader who walked India on the path to Independence.

Why is Martyr’s Day Observed?

Mahatma Gandhi played a significant role in India's struggle for Independence. He brought forth the awe-inspiring method of non-violent protests, Satyagraha and spread the word of peace and harmony even in dissent. However, on January 30, 1948, he was assassinated by Nathuram Godse. This shocking turn of events left the world at a standstill. Gandhi's death was a day of mourning for the entire world, and this is the reason that his death anniversary is observed as a day to pay homage to this great leader and spread forward his ideologies. Mahatma Gandhi's vision played an irreplaceable role in creating this country that we know and love, and his death anniversary stands a reminder to everything that he fought for.

How is Martyr’s Day or Mahatma Gandhi's Death Anniversary Observed?

On this day, government offices, local schools and colleges and various organisations conduct prayer services and sing Gandhiji's favourite Bhajans and songs in his memory. On this day, the President of India, Vice President, Prime Minister of India and the three service chiefs all get together at the Rajghat memorial and pay homage to the Mahatma. Sabarmati Ashram, which was one of the residences of Gandhi Ji, also organises special prayer sessions and events to mark this day.

(The above story first appeared on LatestLY on Jan 29, 2020 04:02 PM IST. For more news and updates on politics, world, sports, entertainment and lifestyle, log on to our website latestly.com).