National Doctors' Day 2022 India Date & Significance: Why is This Day Celebrated by the Indian Medical Association (IMA)? Everything You Need to Know

In India, July 1 is celebrated as National Doctors' Day aka National Doctor's Day. This day is celebrated in the memory of the great doctor of the country and former Chief Minister of West Bengal, Dr Bidhan Chandra Roy. He was born on 1 July 1882 and died on this day in 1962 at the age of 80. 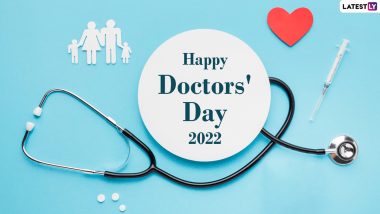 Happy National Doctors' Day 2022 in India! Doctors have been given the status of God in society. They work selflessly day and night without worrying about their lives in the service of the society and the country and this one day of the year is dedicated to them as Doctors Day across the country. Doctors' Day is celebrated on different dates all over the world with the same aim of showing respect to doctors around the world. National Doctors’ Day 2022 Date in India: Know Theme, History and Significance of the Day Celebrated in Honour of Dr Bidhan Chandra Roy Birthday.

Who Was Bidhan Chandra Roy?

According to the records, being an Indian, he was not given an opportunity in London earlier, but Dr Bidhan was not one to lose heart and kept applying. Eventually, his application was accepted for the 30th time. Dr Roy was so meritorious that within two years he acquired the degree of Physician and Surgeon simultaneously. Bidhan Chandra Roy returned to India in 1911 and began his career as a doctor in Sealdah.

Bidhan Chandra Roy was a doctor as well as a social worker, freedom fighter and politician. He actively participated in the freedom struggle of the country. On Gandhiji's insistence, he stepped into active politics and joined the Indian National Congress party. He became the second Chief Minister of Bengal after Praful Chandra Ghosh in 1948 and remained in this position till his death on 1 July 1962. He is also considered the architect of West Bengal.

(The above story first appeared on LatestLY on Jul 01, 2022 08:40 AM IST. For more news and updates on politics, world, sports, entertainment and lifestyle, log on to our website latestly.com).