On Dussehra 2020, Know The Story of Ravan Dahan: How Lord Rama Killed The Ten-Headed Demon King of Lanka After a Crucial Secret Revealed by Vibhishana

On every Dussehra, devotees burn effigies of Ravana which is called the Ravan Dahan. But what led to the ultimate defeat of Ravan, what role did Ravan's brother Vibhishan play in Rama's victory? Let us know the interesting tale of how exactly Ravana was killed by Lord Rama. 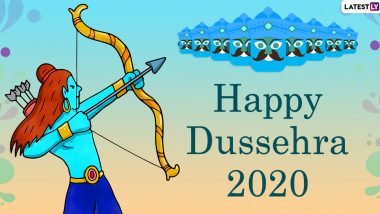 Happy Dussehra 2020! Also known as Vijayadashmi this day celebrates the victory of Lord Rama over Ravana, the demon king of Lanka. A lot of us have grown up reading, listening or watching the epic of Ramayana, which narrates the entire story of Lord Rama's vanvaas, Sita's abduction and Rama's attack over the Lankan army. The day of Dussehra marks the occasion when Shri Ram defeated the ten-headed mighty demon king Ravana and left back for Ayodhya with his wife Sita. But do you know how exactly the death of Ravana at the hands of Rama took place? On every Dussehra, devotees burn effigies of Ravana which is called the Ravan Dahan. But what led to the ultimate defeat of Ravan, what role did Ravan's brother Vibhishan play in Rama's victory? Let us know the interesting tale of how exactly Ravana was killed by Lord Rama and who all played an important role in his victory. Dussehra 2020 Date, Ravan Dahan Muhurat Timings: Know Significance, Aparahna Puja Time and Rituals to Mark the Victory of Lord Rama.

There are a lot of things to consider when it comes to Lord Rama defeating Ravana. The demon king was blessed with the curse of immortality by Lord Shiva which is why it was difficult for Rama to defeat Ravana. Because of Ravana's strong worship to Lord Shiva, he is even respected and worshipped in some temples in India. But Ravana was cursed by many people in his life which eventually led to his death.

It is said that when Ravana killed King Anaranya of the Ikshawku dynasty, he told Ravana while dying that one day the son of King Dasharath would eventually kill him. So Ravana apparently knew his fate would be to die at hands of Lord Rama who is the seventh avatar of Lord Vishnu.

During the battle, Ravana was performing a yagna that would change the fate of the war against Lord Rama in his favour. But Rama sent his army of monkeys to disturb the demon king. When he did not budge, they took away his wife Mandodari but Ravan still stay put. Seeing this, Mandodari was agitated and shamed him by saying how Lord Rama was at war to save his wife Sita while Ravana did not even move. This made Ravana move from the yagna and it was left unsuccessful.

Ravana's brother Vibhishana played a very significant role in Lord Rama's victory over the Lankan king. Because of Vibhishana's differences with Ravana, he sided with Lord Rama and divulged many secrets of the demon king to Rama's army. Vibhishana told them the secret passage to the temple of their family deity. The most important secret divulged by Vibhishana was telling Rama the secret of Ravana's death. He told Lord Rama that Ravana's nectar of immortality was in his belly and it is necessary to dry it to kill him. Rama was finally able to kill Ravana by aiming at him exactly.

Lord Rama's victory over the Lankan king was a joyous occasion which is celebrated as Dussehra. It is symbolic of the victory of good over evil.  Dharma was established on the Earth because of Rama's victory over Ravana. It is celebrated with much enthusiasm all over India, but the ways of celebration may differ. On this auspicious occasion, share this story about the ultimate defeat of Ravana by Lord Rama and pass on greetings of the festive day.

(The above story first appeared on LatestLY on Oct 25, 2020 09:42 AM IST. For more news and updates on politics, world, sports, entertainment and lifestyle, log on to our website latestly.com).