Raksha Bandhan 2020 WhatsApp Messages: From the Legend of Krishna-Draupadi to Rani Karnavati-Humayun Story, Share These Interesting Tales and Mythological Stories As WhatsApp Forwards 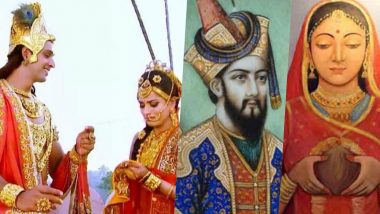 Happy Raksha Bandhan 2020: Raksha Bandhan 2020 is finally here. The popular Hindu festival falls on August 3 this year. People have already begun wishing their beloved siblings with festival greetings and images. But for those who are keen on learning about interesting tales and mythological stories associated with Raksha Bandhan but find it too boring to read online, we bring, and just for them, these legends as WhatsApp messages and forwards! You can know everything about Krishna-Draupadi to Rani Karnavati-Humayun stories in the matter of a few minutes and also forward it to your family and friends. Raksha Bandhan Images & HD Wallpapers for Free Download Online: Wish Happy Raksha Bandhan 2020 With WhatsApp Stickers and GIF Greetings.

Raksha Bandhan is traditionally celebrated on the full moon day amid the month of Shravan/Sawan (Shravan Purnima) and is one of the most popular festivals in India that celebrates the bond between siblings. Sisters tie rakhi (a holy string of protection on the brother's wrist) to celebrate the day. On this day promises are made that siblings will protect each other.  The day is associated with various legends, stories and tell-tales that glorifies the relationship between siblings. According to Hindu beliefs, a war broke out between the gods and the demons that continued for 12 years.  While the Danavas(demons) won and occupied the throne of Indra, the king of the gods but the defeated Indra then consulted his spiritual master Brihaspati who advised to recite some mantras so that he could get protection.

It is said that the chanting of mantras started in the month of Shravan on the full moon day and a thread was tightly tied around a small metal with blessings from the gods. After chanting, this small metal with safety blessings was tied on Indra's wrist by Shachi, also known as Indrani. It helped Indra win the war and he stayed protected. Ever since brothers and sisters celebrate this as a festival where the Raksha Bandhan is tied. Here are other legends related to Raksha Bandhan that can be sent as WhatsApp forwards:

According to this legend, once Lord Krishna suffered an injury and Draupadi couldn't bear to see him in pain. She immediately tore the pallu(edge) of her sari and tied it on the wrist of Shri Krishna and to stop the bleeding and it did. This incident has been told in the importance of Rakshabandhan where she protected him and he did the same during cheerharan.

According to Indian history, Mughals were also respected Rakshabandhan. Jahangir set an example by protecting a Rajput woman making Panna's Rakhi particularly notable in this context. Once during a serious discord among two princely states of Rajasthan, the Mughals attacked a princely state. Panna who was also surrounded by the Mughals sent a rakhi to the ruler of another princely state, who was going to help the Mughals. On seeing the Rakhi he made sides with Panna. Raksha Bandhan was then celebrated amongst the rulers of both princely states to celebrate firm friendship.

This took place in medieval history when Hindurani Karmavati of Chittor sent a rakhi to Humayun, the Mughal emperor of Delhi as his brother. Humayun accepted Karmavati's Rakhi and he even fought with the emperor of Gujarat to protect the honour of the queen.

(The above story first appeared on LatestLY on Aug 03, 2020 07:10 AM IST. For more news and updates on politics, world, sports, entertainment and lifestyle, log on to our website latestly.com).