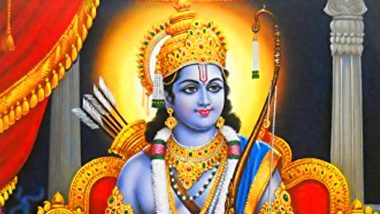 The country will celebrate the festival of Ram Navami on April 2. Rama Navami is a Hindu festival that celebrates the birthday of Lord Rama. Ram Navami is celebrated on the ninth day of the first month of the Hindu calendar, Chaitra. Lord Rama is a Hindu deity. He is considered to be the seventh incarnation of the god Vishnu. Happy Ram Navami 2020 Wishes in Advance: WhatsApp Stickers, Facebook Greetings, GIF Images, Messages And SMS to Celebrate the Birth of Lord Rama.

Lord Rama was born to Kaushalya and Dasharatha in Ayodhya, the ruler of the Kingdom of Kosala. Lakshmana, Bharata, and Shatrughna were his siblings. Lord Rama was married to Sita. He, along with his wife and brother, went to exile for 14 years. The birth of Lord Rama marks the culmination of spring festival Chaitra Navratri which begins on Ugadi. People conduct special prayers and rituals and conclude the nine-day of festivities. Ram Navami 2020: Story of Lord Rama’s Birth and Celebrations Associated With the Hindu Festival.

Every year, Hindus celebrate Ram Navami is celebrated with great enthusiasm and fervour, especially in Ayodhya. It is believed that by praying to Rama, devotees will be blessed with peace, harmony and prosperity in their lives. Devotees throng temple to seek blessings of the Hindu deity. However, due to the outbreak of coronavirus Ram Navami celebrations in Ayodhya, scheduled between March 25 and April 2, 2020, have been cancelled. The Vishwa Hindu Parishad (VHP) has also cancelled its shobha yatras and rath yatras.

(The above story first appeared on LatestLY on Mar 30, 2020 01:46 AM IST. For more news and updates on politics, world, sports, entertainment and lifestyle, log on to our website latestly.com).