Bhagat Singh was born in the year 1907 and embraced martrydom on March 23, 1931 at the age of 23. His death anniversary is celebrated as Martyrs' Day. 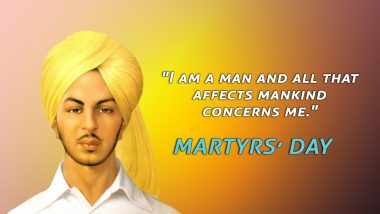 Bhagat Singh was born in the year 1907 and embraced martrydom on March 23, 1931 at the age of 23. His death anniversary is celebrated as Martyrs' Day.

Bhagat Singh, famously known as Shaheed Bhagat Singh, was a revolutionary who continues to inspire and holds a special place in the hearts of Indians. His death anniversary, which falls on March 23 is celebrated as Shaheed Diwas or Martyrs' Day. Bhagat Singh was born in the year 1907 and embraced martrydom on March 23, 1931. Bhagat Singh is remembered as an Indian socialist revolutionary whose brave acts and fierce writing made him a hero for the freedom fighters and continues to inspire social activists and those fighting for justice. Bhagat Singh also wrote some memorable essays and letters and we will include some of his quotes in this article.

India's first Prime Minister, Pandit Jawaharlal Nehru wrote about him, "Bhagat Singh became popular because he seemed to vindicate, for the moment, the honour of Lala Lajpat Rai, and through him of the nation. He became a symbol; the act was forgotten, the symbol remained, and within a few months each town and village of the Punjab, and to a lesser extent in the rest of northern India, resounded with his name." Bhagat Singh is indeed a symbol of strength and bravery for all Indians. Here are few of his quotes that will inspire one and all:

1. “Lovers, Lunatics and poets are made of same stuff.”

2. “It is beyond the power of any man to make a revolution. Neither can it be brought about on any appointed date. It is brought about by special environments, social and economic. The function of an organised party is to utilise any such opportunity offered by these circumstances.”

3. “I am a man and all that affects mankind concerns me.”

4. “Merciless criticism and independent thinking are the two necessary traits of revolutionary thinking.”

5. “Revolution did not necessarily involve sanguinary strife. It was not a cult of bomb and pistol.”

6. "Life is lived on one's own term, others are required only for the body to be lifted on final ritual (death).

7. “Crush your individuality first. Shake off the dreams of personal comfort. Then start to work. Inch by inch you shall have to proceed. It needs courage, perseverance and very strong determination. No difficulties and no hardships shall discourage you. No failure and betrayals shall dishearten you. No travails (!) imposed upon you shall snuff out the revolutionary will in you. Through the ordeal of sufferings and sacrifice you shall come out victorious. And these individual victories shall be the valuable assets of the revolution.”

In the year 1968, a postage stamp was issued in India commemorating the 61st birth anniversary of Singh. Bhagat Singh has left an indelible mark on the psyche of Indian  youth. Bhagat Singh's life and deeds have been widely celebrated in popular culture through songs and movies. Bhagat Singh lived for only 23 years and embraced martyrdom at that young age. But he proved that what matters is what you achieve in the years you live and not the number of years you spend on earth. As Bhagat Singh said, "By crushing individuals, they cannot kill ideas." Bhagat Singh's ideas will live forever, and we need to adopt them today, more than ever.

(The above story first appeared on LatestLY on Mar 23, 2018 01:24 PM IST. For more news and updates on politics, world, sports, entertainment and lifestyle, log on to our website latestly.com).