Thanksgiving 2018: ‘Jingle Bells’ Was A Thanksgiving Song And Other Crazy Facts About The American Holiday

Also, did you know the next day after Thanksgiving is the busiest for the plumbers in the U.S.? 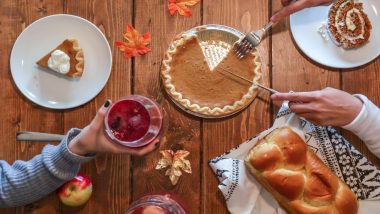 Thanksgiving is almost here, and it is that time of the year when everyone is spreading happiness and gratitude amongst each other. Dating back to 1621, the tradition of Thanksgiving day celebrates the first successful harvest in Plymouth Rock and exhibit appreciation towards it. While the celebrations have evolved, we cannot deny that Thanksgiving is one of the most enjoyed Holidays among the Americans. Thanksgiving 2018: Know Date, History & Significance Behind the Most Awaited Holiday in the U.S.

The history of Thanksgiving is unique. The Pilgrims from England who settled in Plymouth in the year 1619. The conditions weren't favourable for a living due to harsh winters, however, on the successful first harvest, they gave thanks, and that event is celebrated as Thanksgiving day. The pilgrims also invited the local Native Americans to meet them for a massive harvest feast they held. Turkey Challenge Goes Viral Freaking Parents out!

This amazing Holiday is unconditionally loved and celebrated all across the world not only in America these days wherein families and friends meet and celebrated each other's presence. Here are a few facts about Thanksgiving that you might want to know of.

Did you know that the famous Christmas song Jingle Bells was originally a Thanksgiving song? It is said that the then titled 'One Horse Open Sleigh' original by James Pierpont was composed for Thanksgiving.

2. Did you know of the Turkey Talk-Line by Butterball? Since over 35 years Butterball has been answering more than 100,000 turkey related questions around Thanksgiving.

Thanksgiving day sees the most number of residential building fires in the US when compared to the other days as per reports by the US fire administration.

Sarah J. Hale is known to be the 'mother of Thanksgiving.' Reports have it that she wrote a letter to President Abraham Lincoln in the year 1863 requesting them to declare Thanksgiving as a national holiday.

While we know that having Turkey on Thanksgiving has almost become a ritual, in reality, there is no evidence that whether they actually ate Turkey in the first Thanksgiving in 1621.

Every year a Turkey or two are forgiven in the White House as a part of a traditional ritual. This year the two lucky turkeys named “Peas” and “Carrots” were spared by President Donald Trump.

In the United States, Minnesota produces the maximum amount of turkey; also, the world's biggest human-made turkey is located in Frazee, Minnesota.

On an average, an individual eats over 4,500 calories on Thanksgiving.

Also, did you know the next day after Thanksgiving is the busiest for the plumbers in the U.S.? So much so that they actually call the Friday after Thanksgiving 'Brown Friday.' Nevertheless, Thanksgivings has to the favourite festival of most Americans and these days so many other countries are celebrating Thanksgiving. What are your feels, lets us know in the comments section below.

(The above story first appeared on LatestLY on Nov 21, 2018 01:31 PM IST. For more news and updates on politics, world, sports, entertainment and lifestyle, log on to our website latestly.com).