It can be easy to confuse HIV and AIDS. They are different diagnoses, but they do go hand-in-hand: HIV is a virus that can lead to a condition called AIDS, also known as stage 3 HIV. At one time, a diagnosis of HIV or AIDS was considered a death sentence. 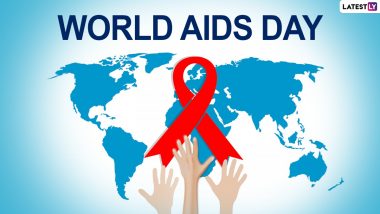 World AIDS Day will be observed worldwide on December 1. HIV is a major global public health issue, having claimed almost 33 million lives so far and the burden is only increasing. The aim of this day is to spread awareness about the condition to bring a spike in early diagnosis so that treatment can be fastened. While HIV infections have now become manageable better than the earlier days because of increased access to effective HIV prevention, diagnosis, treatment and care in modern healthcare system, a lot still needs to be done. The first and most important step is the awareness about the condition.  As per WHO, there were an estimated 38.0 million people living with HIV at the end of 2019. As a result of concerted international efforts to respond to HIV, coverage of services has been steadily increasing. In 2019, 68% of adults and 53% of children living with HIV globally were receiving lifelong antiretroviral therapy (ART). World AIDS Day 2020 Quotes & HD Images: Inspirational Sayings and Slogans to Raise the Awareness on HIV/ AIDS.

Access to proper HIV testing, treatment and care is not easily available to people and one of the biggest hurdles is the knowledge about the condition amongst common people. Not many people, even know about the difference between HIV and AIDS. HIV aka human immunodeficiency virus describes the virus. As the name suggests, only humans can contract it, and it attacks the immune system. As a result, the immune system is unable to work as effectively as it should, here's more about the difference between HIV and AIDS.

What Are HIV and AIDS? Know the Difference

Many people confuse HIV and AIDS and use the terms interchangeably. While they go hand-in-hand, they are different diagnoses. HIV is a virus that can lead to a condition called AIDS, also known as stage 3 HIV. At one time, a diagnosis of HIV or AIDS was considered a death sentence. Thanks to research and the development of new treatments, people with HIV at any stage today are living long, productive lives. An HIV-positive person who adheres to regular antiretroviral treatment can expect to live a near-normal life span.  AIDS (which is short for acquired immunodeficiency syndrome) is a condition. Contracting HIV can lead to the development of AIDS.

Due to COVID-19, HIV prevention, testing, treatment and care services are disrupted in countries with fragile health systems. Less provision of these services will leave many at greater risk of HIV infection and AIDS-related deaths.

(The above story first appeared on LatestLY on Nov 30, 2020 07:59 PM IST. For more news and updates on politics, world, sports, entertainment and lifestyle, log on to our website latestly.com).